We’re going to need a bigger boat!   Or at least a boat that can’t be toppled over by a great white shark!  A documentary film had a run in[1] with this massive shark that would have scared anyone to death! 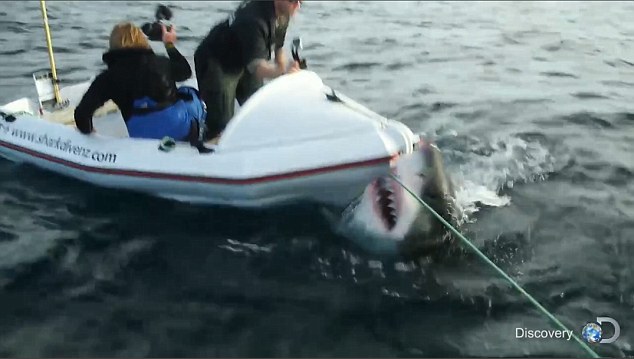 “Shocking footage has emerged of the terrifying moment two people stood in a tiny dinghy while a six metre great white shark charged them.

A film crew shooting the documentary Lair of the Megashark were just off New Zealand’s Stewart Island when they attempted to put a camera on the dorsal fin of the massive ocean predator who decided to nudge the boat and bite at the thin rope that tethered the dinghy to the main boat.

The two men that can be seen on the boat are shark experts Jeff Kurr and Andy Casagrande.

They can be seen panicking as the great white uses it’s strong jaws and tail to shake the boat, causing it to sway dangerously.
The shark disappears for a few moments while the crew regroups, however, they are stunned a second time when it resurfaces dangerously close to the dinghy, as it tries to get a hold of the bait attached to the main rig.

One of the men described the experience as ‘a bit nerve racking’ while another man can be heard saying: ‘I don’t think this is such a brilliant f*****g idea you know’.

Another shark is spotted breaching near the small boat before the crew decide it is too unsafe to have a boat of that size in the water, while such large predators are in the area.

One man can be heard warnning that while sharks are ‘not malicious’, they do ‘kill things for a living’.

The documentary Lair of the Megashark was screened on the Discovery Channel last year during Shark Week.

Images of the footage have been posted online by groups who want to ban shark diving as they think it’s causing sharks to associate humans and boats with food.”

There isn’t enough money in the world to get my to jump into a tiny boat like that with a big shark like that  in the water.  I certainly hope those crew members wore their brown pants that day.