If you are going to debate[1] Rand Paul on climate change or really anything at all, you had better do your homework and come prepared. I think Jake Tapper just found that out the hard way. President Trump was absolutely doing the right thing when he pulled the US out of the monstrous Paris Climate Accord. That agreement would have cost the US in excess of $3 trillion over the next few years. It is a massive wealth redistribution scheme that benefited countries such as India, Iran and China. Those last two are enemies of ours and China is the biggest polluter on the planet. Paul is also correct in saying it would have cost us 6 million jobs. It’s a Ponzi scheme that would have destroyed us economically, period.

President Trump campaigned on pulling us out of this accord and he kept his word. He is working for Americans, not global elitists who would benefit from this scam. That includes huge companies such as Exxon and Shell who stood to make a killing in projects that would have been implemented globally. No wonder they objected to pulling out of it. Not only was this the worst possible deal for American workers, it would have skyrocketed taxes and utility bills for Americans already suffering under a tax burden that is far too great. Coal jobs will come back to the US… eventually other energy options will take their place, but it will be a gradual transition. 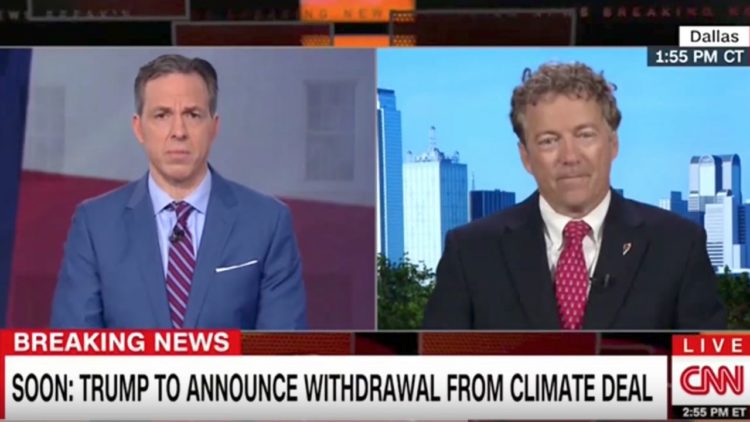 Sen. Rand Paul (R-Ky.) shot down every global warming argument that CNN’s Jake Tapper tossed at him on Thursday after President Donald Trump announced the U.S. would pull out of the Paris Climate Accord[3].

“I think one of the reasons President Trump was elected is that he promised that he would defend American workers and American jobs,” he said. “There are estimates that this agreement, which is unfair, and punishes America in a much greater fashion than other countries, that we would lose 6 and a half million jobs. Meanwhile, countries like India and countries like Iran, we would have to pay them to reduce their carbon emissions.”

As far as China goes, Rand Paul nailed it: “So if America, under this accord, has to reduce her carbon footprint by 20 percent, but China doesn’t have to reduce their carbon footprint at all,” he said, “how could that possibly be fair? Who in their right mind would sign something that says China doesn’t have to do anything? When you reduce your carbon footprint it means you have to reduce your energy output, or you have to convert to other sources, but there may not be enough energy from the other sources. So then we’re talking about going without energy.” China would not have to reduce their carbon footprint at all… without this accord, many areas of the US are voluntarily cutting back between 20 and 22%. That’s called freedom and will be done in a way that doesn’t destroy the country or crush Americans in the process.

If you listen to the left, Trump just doomed us to mass extinction. It’s ridiculous. The left did not want this agreement because it didn’t go far enough, but now that Trump has pulled us out of it, the sky is falling and we’ve scheduled an apocalypse. It’s called weather… the earth is not warming or cooling drastically. It’s doing what it has always done. The difference now is you have politicians and power mongers who have found another way of grasping more wealth, power and control by using climate change as an excuse.

NASA and climatologists have been lying to us for decades. They fudge the numbers and just make crap up. They are consistently wrong and everyone knows that predicting the weather with accuracy is still very difficult to do.

My favorite part of the exchange between Paul and Tapper was this:

“But they have been predicting for years that the temperatures would go up,’ Tapper responded, “that glaciers would shrink, that sea ice would disappear, that oceans would rise, that the sea level would rise and there would be longer and more intense heat waves and all of that has happened, Senator, all of it has happened.”

Very true and what’s more, the oceans are not noticeably rising, the temperature has barely risen and the glaciers and sea ice are not disappearing… they are growing. All of this is bull crap. Spare us the alarmism. Global warming and climate change are possibly the biggest hoaxes man has ever invented. It’s good to see that Paul isn’t afraid to fight with facts.