VIDEO: While Having Brain Surgery, This Man Played The Guitar At The Same Time

When you have surgery, you expect to be under anesthesia, right? Not when having brain surgery – surgeons usually want to be sure you’re able to respond to commands. This patient went above and beyond, though – playing “Yesterday” by the Beatles while the surgeons did their thing[1]. 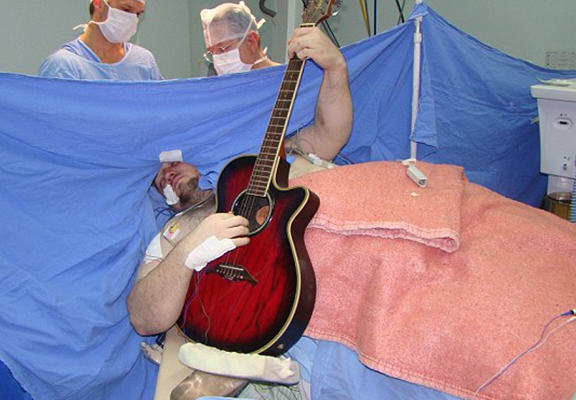 He was told to keep playing the guitar through surgery, choosing the Beatles ‘Yesterday’ so that doctors could keep an eye on the 33 year old’s brain function and make sure there was no damage, and while we have heard of patients being asked questions through surgery to keep them lucid and allow brain mapping, to see the video is pretty special indeed.

It is not the first time something like this has taken place, with a concert violinist Roger Frisch doing the same thing and playing his violin during his surgery inserting an implant in his brain.

A hospital spokesperson commented on the Brazilian’s operation and claimed:

While it surprised everyone, the surgery was performed.

Cerebral monitoring – important to prevent injuries that occur in the sensory, motor and speech areas – occurred during the procedure.

What a talented man! Best wishes for a speedy recovery.