A mystery person has put up multiple street art ‘anti-Hillary’ signs across from the rumored Hillary HQ in New York. The striking signs have caught the attention of many, and not in a good way – not that I feel bad for Hillary in any way- but the signs are very funny. More from The Daily Mail[1]: 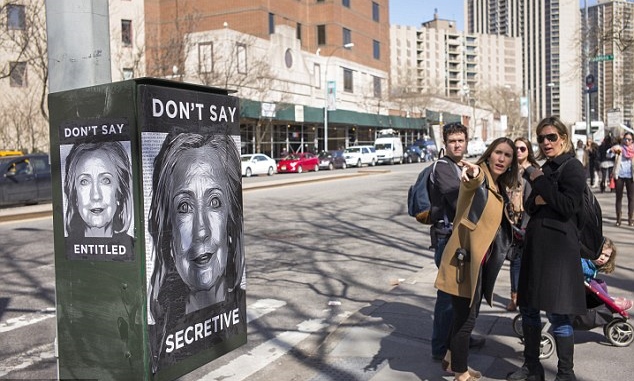 The street art appears to be a dig at a group of Clinton supporters who said it would be on the look out for evidence of sexism in reporting about the Democratic politician, according to the Weekly Standard.

Last month, the New York Times’ Amy Chozick brought attention to the efforts made by the group, which goes by the name of ‘HRC Super Volunteers’.

The descriptive terms that Clinton’s fan club said it does not want applied to their candidate include ‘polarizing, calculating, disingenuous, insincere, ambitious, inevitable, entitled’ and ‘over confident.’

The posters are said to have appeared in Brooklyn on Saturday night near her campaign’s new headquarters in the borough, where staffers began working on Friday.

It is not known who created or posted the Brooklyn street art.

Bwahahahahaha! I just love this street art, and I am hoping I can get a t-shirt with some of this awesome art on it soon. I guess it’s true – location. location, location is key. Happy trails, Hillary.