After 9/11, planes that enter the no-fly-zone over Washington D.C. face the threat of being shot out of the sky.  That didn’t deter a Florida man from landing his gyro-copter on the Capitol lawn in a daring protest[1]. 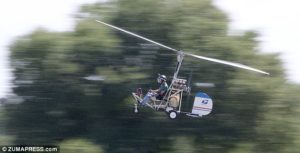 “The Florida mailman who caused a major security scare when he landed his gyro-copter on the US Capitol lawn on Wednesday afternoon was just seconds from being shot out of the sky.

House Homeland Security panel Chairman Michael McCaul revealed that Capitol authorities had Doug Hughes, 61, in their sights and were prepared to open fire.

‘Had it gotten any closer to the speaker’s balcony they have long guns to take it down, but it didn’t. It landed right in front,’ McCaul said about the flight which was undetected until authorities actually saw the craft approach.

However, Hughes claims he informed the Secret Service and Capitol police of his potentially lethal stunt into the no-fly zone, which was designed to draw attention to campaign finance reform and government corruption.

Speaking prior to the flight and just days after a man shot himself dead in front of the Capitol on Saturday causing panic, Hughes appeared confident he would survive his ‘insane’ protest.

‘I don’t believe that the authorities are going to shoot down a 61-year-old mailman in a flying bicycle,’ said Hughes of the latest embarrassment for White House and Capitol security.

Indeed, NORAD reported that they did not scramble any assets and were not informed of the flight until it had landed.

And local Washington D.C. response helicopter units designed to deal with slow moving targets admitted they did not react either.

Doug Hughes’ close friend Mike Shanahan, said today that the Hughes is not a terrorist and did not mean any harm with his protest.

‘I was scared to death they were going to kill him,’ Shanahan said to the Tampa Bay Times. ‘My thanks goes out to whomever it was who decided not to pull the trigger.’

The mailman’s flight to raise awareness for campaign finance reform and donation caps caused the Capitol to go into lockdown as stunned members of the public watched him land his single-seat gyro-copter around 2pm and breach the No-Fly ‘P56-Zone’.

‘He has no weapons or anything else,’ said Michael Shanahan to CNN. ‘I know him personally. He’s like a pitbull when he has an idea. He wants to wake up the country.’

Hughes, who has been planning his ‘insane’ D.C. flight for two years was promptly arrested by police and FBI teams moved in quickly afterwards with bomb disposal robots.

Capitol Police didn’t immediately identify the pilot or comment on his motive, but a Florida postal carrier named Doug Hughes took responsibility for the stunt on a website where he said he was delivering letters to all 535 members of Congress in order to draw attention to campaign finance corruption.”

While the protest may have been genuine, the idea of flying an aircraft into a no-fly-zone is probably not the best idea.  Next time, he should consider many of the other public transit options that Washington D.C. has to offer.