When Clinton campaign manager Robbie Mook tried to complain that WikiLeaks was releasing “stolen” emails, Fox News’ Chris Wallace shut him down immediately. It’s hard to look like the victim when you’re also very clearly being a hypocrite, which is exactly what Wallace pointed out. 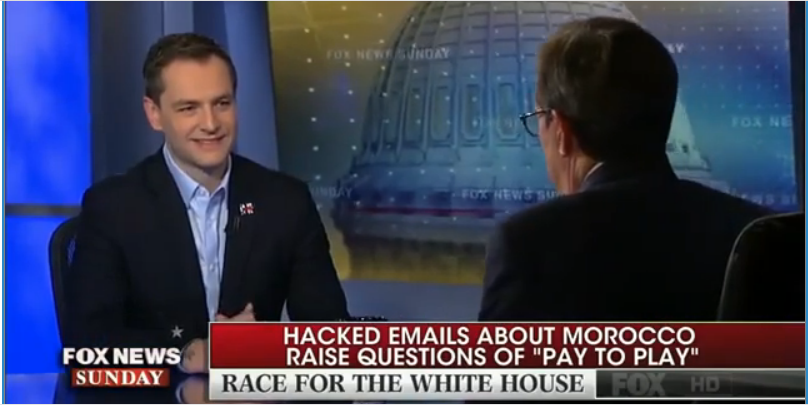 The Democrats have been trotting out the same tired excuse for the WikiLeaks emails implicating them in very sketchy behavior, especially surrounding the election. They want to simply brush off the exposed information by claiming that Russia is doing it in an attempt to influence our election and they very well might be. However, that doesn’t explain away the behavior documented in the emails and given that the election is close at hand, this is definitely something that needs to be dealt with first.

But to the dismay of Mook, Chris Wallace wasn’t about to let him lay the blame on the Russians, when we know full well that their petulant pouting about “stolen” documents is a one-way street.

“These are stolen documents, stolen by the Russians — it’s now confirmed — from John Podesta, that are being put out for this purpose,” Mook said.

“Can I speak to that?” Wallace interjected. “You know, the Trump tax returns were stolen as well when they were mailed to The New York Times. You guys didn’t object to that, in fact, you jumped all over them.”

A stunned Mook tried to respond: “Well, we don’t know where those tax returns came from,” he said.

When Wallace said that they were “clearly stolen,” Mook replied, “We don’t know that.”

“Do you think Trump had given them?” Wallace hit back. The Clinton campaign chief responded that he didn’t know.

After that particularly painful exchange, it’s clear that Mook wants to continue blaming the Russians for releasing the damning correspondences.

“Again, this is the discussion the Russians[2] want us to be having. They stole this information, they’re selectively leaking. I can’t even verify the information you have there. We simply don’t have enough time as a campaign…”

“I promise you, if these were not true, you’d tell us,” Wallace said.

They’re pulling out every excuse in the book and it would be hilarious if it wasn’t so painful. They’re really trying very hard to deflect all questions about their frankly shady behavior, but it’s just not working. You might be able to convince simple-minded Hillary Clinton voters that this stuff doesn’t matter, because they’re already proficient at over-looking some very serious indiscretions involving the Clinton family, but the rest of us aren’t stupid. Thank you Chris Wallace for not letting them get away with simply shifting the blame.