The left’s premise of “social justice” has simply gone too far. For decades, the left’s Department of Education and liberal academia at universities have indoctrinated impressionable minds to believe that it is their solemn duty to abuse people as a way of advancing social justice. One woman showcased this breed of liberal “tolerance” recently as she physically accosted a young man for wearing dreadlocks, a hairstyle that she claimed was a “cultural appropriation” of her culture.[1] 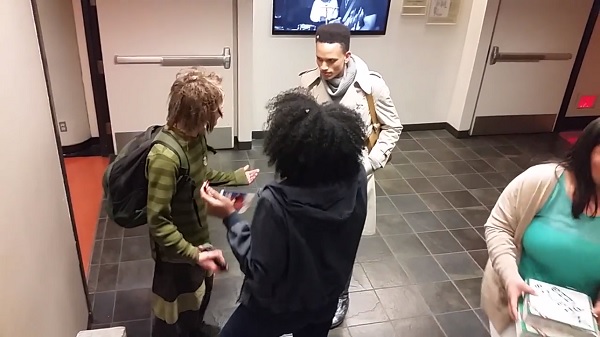 College students have a gift for turning the most moronic stories… into news. But in a fun twist of events, it’s the college employee, not the sniveling student, who makes a fool out of herself. Which, let’s be fair, tends to happen. A lot (see Melissa Click, Disgraced Mizzou Professor Caught Screaming Profanity at Police[3]). So, what kind of micro-agression was served today? Well, this lass found herself severely triggered… by a white student’s appearance? Oh my…

She couldn’t contain her sense of “cultural appropriation” outrage. Thus, violence was the only acceptable answer. Obviously. The issue at hand here? His dreads. And no, she wasn’t offended by their unsightly appearance. Nor their pungent aroma. Though I’d still recommend against staring directly at them, lest you be turned to stone. While vomiting uncontrollably.

No, she felt he was violating the unspoken rules of black culture. Or something. It’s an easy rule to miss, so allow me to point it out for you: he can’t twist his hair that way unless he’s black. Look, we get it. She doesn’t like the do. That’s fair. I don’t like it either. But to stop him, tell him off, block his way, and manhandle him? Too far. To call him out for cultural appropriation? Or racial appropriation? Downright silly.

Speaking of racial appropriation, I don’t like Beyoncé’s faux brassy yellow tresses. Or that accent mark in her name. (read Dear Beyoncé: It’s Not Because You’re Black, it’s Because You’re a Whore[4] here). But if feminism has taught us anything, it’s that you still don’t get to put your hands on that person. Also that everything is rape culture[5].

This broad, the self pity is strong with this one. She grabs him and blocks him from moving. When he pushes her away she gets angry. Then she accuses him of getting handsy.

Here’s a tip: don’t put hands on people just because you don’t like their hair. Especially when there are cameras around. Doubly so if you happen to be working at the time. Oops.

It’s not her fault. Overly-aggressive, leftist women have a lot on their plate to consider. They don’t have the time to think about the repercussions of their actions. They’ve got places to go, babies to kill. How else are they going to impress “gay inspector gadget” as he looks on (see him in the background).

Of course, this is no surprise to yours truly. I’ve had a run-in or two with feminists myself, don’t you know…

Don’t get me wrong- this kid seems uppity in his own right and precisely the kind of social justice warrior that would espouse the need for fair trade coffee to be sold in the student union is a moral imperative.

However, the man was physically accosted for his hairstyle. In today’s America, social justice warriors have been emboldened to the point where they feel entitled to accost people over a supposed cultural appropriation of a hairstyle.

With this in mind, the next time I see someone drinking Guinness, should I go smack the hell out them because they’re drinking the drink of my people? Or would that be, oh, I don’t know, absolutely friggin’ ridiculous?

I think we all know the answer…