Joanne Twomey, a former Democrat state rep, got into a heated argument with Gov. Paul LePage at a public forum.  It was so heated that as state police started to confront her…she threw a jar of vaseline at the governor[1]? 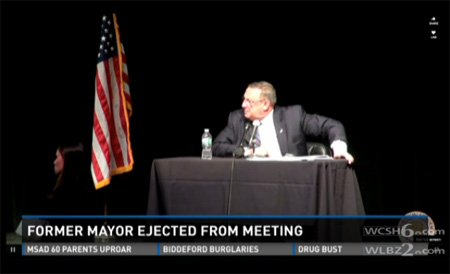 As the Portland Press-Herald reported, the governor came under fire in 2013 for remarks he made about Assistant Senate Majority Leader Troy Jackson in which he mentioned Vaseline.

“Sen. Jackson claims to be for the people, but he’s the first one to give it to the people without providing Vaseline,” LePage said.

The Press-Herald reported Thursday night that no charges had been filed against Twomey. LePage spokesman Peter Steele cast doubt on whether police would pursue them.

Watch the moments leading up to the event below. I mean seriously, who throws a shoe a jar of vaseline?