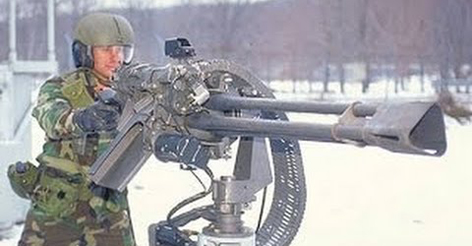 It’s name is the GAU 19B 50 Cal Gatling Gun and they don’t call it the “terrorist killer” for no reason!

This version was released by General Dynamics in 2012 and could raise some serious hell in Syria.

The GAU-19/A is designed for a linkless feed, but can be fed from a standard M9 linked belt if a delinker feeder is used. The rate of fire is selectable to be either 1,000 or 2,000 rounds per minute. The Humvee armament kit version fires at 1,300 rounds per minute. The average recoil force when firing is 500 pounds-force (2.2 kN). In January 2012, General Dynamics announced they would be delivering a new version designated the GAU-19/B. It provides the same firepower in a lighter platform, weighing 106 lbs.

Watch for yourself in the video below. It goes boom!