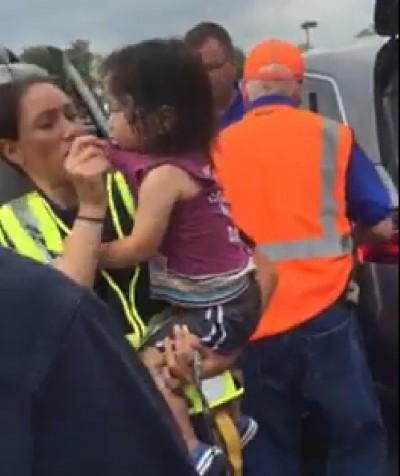 [1]It’s the middle of summer, and areas all around the country are experiencing heatwaves. Everyone knows you can’t sit in a hot car that’s not running with air conditioning for very long. That didn’t stop one mother from leaving her toddler locked in her minivan while she leisurely shopped for a full cart of groceries in New Jersey.[2]

Worried passersby gathered around the locked minivan in a New Jersey Costco parking lot with one goal in mind: To free the crying toddler inside, strapped in her car seat, on what was a hot and humid Thursday afternoon.

“I’m telling the girl, ‘Don’t cry, we’re gonna get you out,’” Rafael Rodriguez, who was trying to get through the windows cracked open just a few inches, told WNBC-TV. “She was drenched in sweat and crying constantly.”

Soon an observer turned on a cellphone camera and caught the moment a Bergen County Sheriff’s officer smashed a window, allowing another officer to grab the 2-year-old girl and pull her out. They were called by the manager of the Hackensack store, WPIX-TV reported.

“She’s soaking wet,” the female officer was heard saying on camera as she held the crying toddler in her arms and rubbed her back.

“Sweat was just coming down, almost as if someone threw a bucket of water on her,” Rodriguez told WNBC, “that’s how bad it was.” Video of the incident has been viewed more than 3 million times since it was posted to Facebook Thursday.

When the mother finally returned with her groceries, all she could say was “Sorry.” The police officer responded, “No ‘sorry!’ She could have died!” The mother was arrested for endangerment, and the child was taken to a hospital and released to her father. This is what happens when you devalue the lives of babies and children. It all started with legalizing abortion. Now people care less and less about those are are too weak and defenseless to do anything, like this poor little girl. She will be traumatized the rest of her life.

Watch the video below, as passersby try to break into the van to free the child and the police officer successfully breaks in.