An Irishman in Istanbul made a simple mistake and was soon swarmed by a crowd of angry Turks.[1] However, the Irishman could handle himself and the Turks who rushed him soon learned a lesson. 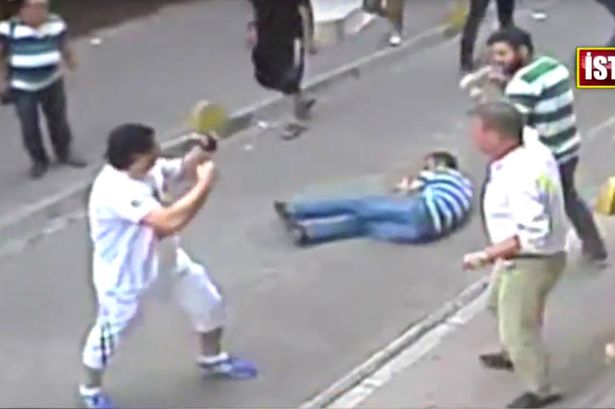 This is the incredible street fight that saw an Irish tourist take on an entire mob of angry Turkish shopkeepers – and win.

In the footage[3] – reminiscent of a Kung Fu film[4] – the locals swarm around the holidaymaker, attacking him with chairs and wooden poles.

But he is more than a match for them, ducking their blows before landing some knock out punches of his own.

Trouble started in İstanbul’s Aksaray district when the big Irishman opened a shop fridge and all the bottles of water spilled out into the street.

The shopkeeper took offence and hit him with a stick after the situation escalated, reports Today’s Zaman[5].

Dozens of neighbouring shop owners then steam in to help – but unluckily for them, their victim is a trained boxer.

At one point, realising he is in for a proper scrap, he takes his sunglasses off and puts them on top of his head so he can take care of business.

Harrying the gang with kicks and punches, he hits one attacker in the face so hard the man goes straight down – and later looks like he is being sick in the street.

Eventually the shopkeepers got the message – and may think again before attacking a tourist.

This is seriously cool and a good lesson: don’t engage physically with someone over a minor offense. They might have some serious training.