President Obama has pledged that he will not interfere with the federal investigations concerning Hillary Clinton’s email scandal. He maintained that he does not get involved in such investigations. However, when Fox News’ Juan Williams defends Obama’s integrity, Jesse Watters jumps in and makes an outstanding point[1] on why we cannot trust Obama to stay neutral in this affair. 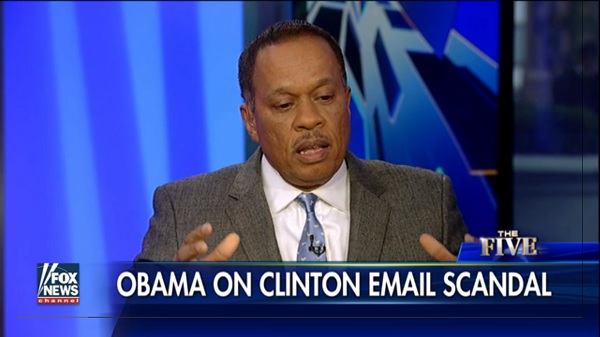 Fox News Channel’s Jesse Watters reminded fellow The Five co-host Juan Williams of the multiple reasons why President Barack Obama is not to be taken at his word when he pledges not to interfere with the Department of Justice’s investigation into Hillary Clinton’s emails.

“I love how [Obama] says there’s a strict line between myself and the DOJ. Kind of like the red line in Syria, Juan. We know this guy doesn’t respect lines,” Watters told Williams on Monday’s show.

“He says he never interferes with investigations — except when he said there’s not a smidgen of corruption in the IRS, or when he said Trayvon could’ve been my son. Do you remember that Juan?” Watters asked.

“How about the Cambridge Police acted stupidly? The guy interferes with investigations constantly,” he continued.

Watters offered the reason he knows Obama has likely already been involved.

“How do you know? He basically says she’s innocent, but he hasn’t been briefed. You can’t have it both ways,” said Watters.

Williams stood by his view the president will not try to influence the outcome of the FBI investigation, though conceded if Obama is lying that would be a major problem. “I don’t think he’s been briefed on the case. If that comes out, you have a whole new ball of wax,” Williams stated.

Fox News’ Chris Wallace questioned the president about the investigation during an interview [3]that aired Sunday. Wallace played a clip of the president saying last October, “I can tell you that this is not a situation where America’s national security was endangered.”

Obama told Wallace on Sunday, “I continue to believe she has not jeopardized America’s national security.”

The president also pivoted into a non sequitur regarding Clinton’s performance of job.

“Here is what I know. Hillary Clinton was an outstanding secretary of state. She would never intentionally put America in any kind of jeopardy,” he said. “But I also think it is important to keep this in perspective. This is somebody who has served her country for four years as secretary of state and did an outstanding job and no one has suggested in some way as a consequence of how she’s handled emails, that that detracted from her outstanding ability to carry out her duties.”

The only problem with this line of reasoning is Gen. David Petraeus’ name could be substituted for Hillary Clinton’s, except in his case he served his country honorably for over four decades, through war and peace, and yet faced criminal prosecution for the mishandling of classified information and was forced to resign from office.

Many have argued his infraction (one count of mishandling) was far less serious than Hillary Clinton’s[4] use of a private, unsecured email server on which more than 2,000 classified emails were put at risk, including 22 top secret documents.

Watters makes an excellent point. President Obama has repeatedly inserted himself into investigations; why should the investigation of his chosen successor be any different?

Further, Obama has admitted that she has done nothing wrong. How would he know if he has not been briefed on this matter?