Watch: Kate Steinle’s Brother Just Revealed What Obama Has Done To His Family

The murder of Kate Steinle is hardly unique. Every day, illegals commit crimes in a country in which they should not be allowed and liberal lawmakers and squish Republicans have allowed this to continue. Steinle’s murder should have been a wake-up call, but instead, it has been shrugged-off by lawmakers and our president. Now, Kate’s brother reveals what the Obama Administration’s flippant attitude has done to him and his family[1] as he mourns the loss of his sister. 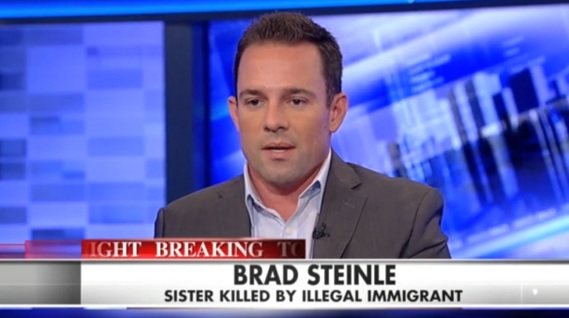 On Fox News Channel’s[3] The Kelly File Wednesday, Megyn Kelly spoke with Brad Steinle, whose sister Kate Steinle[4] was allegedly murdered by an illegal immigrant earlier this month. Kelly asked Steinle about Democratic reaction to Kate’s Law, and if his family has heard from the White House.

“It’s hard to hear,” Steinle said. “We put forth our best effort, we came to D.C. and tried to make a change that we think is logical. It’s a matter of keeping felons off the streets, and instead of tackling the problem and being proactive, I feel like there is a diversion and people aren’t taking it seriously.”

Kelly then read part of a statement[6] from House Minority Leader Nancy Pelosi, D-Calif., whose district includes San Francisco, labeling Kate’s Law the “Donald Trump Act.” Pelosi called the proposal “a wildly partisan, misguided bill that second-guesses the decisions of police chiefs around the country about how to best ensure public safety.”

Steinle blasted San Francisco Sheriff Ross Mirkarimi and how he has handled immigration enforcement in his city. “Mirkarimi has obviously done a horrible job and the fact that you let a seven time convicted felon with five deportations – bring him to your city, roll out the red carpet, let him go on to murder my sister – you’re not doing a good job. You need to have some strict guidelines on how to cooperate with the federal government,” Steinle answered.

Having been a week since Kelly last interviewed him, she asked if Steinle has heard from the White House. “We have not. We have not,” Steinle said.

“We’re not really expecting a call. It’s just like what happened in Chattanooga. You wait four days to lower the flags to half staff. We’ve sat and waited two weeks for our call. It seems as though you need to go out and protest, and people need to be angry in order to get something done. I’m not gonna be angry. My parents aren’t gonna get angry. We’re gonna try and take a proactive and positive way to get change done.”

Kelly noted it’s “hard to believe” the White House hasn’t contacted the Steinles after they said they would’ve liked to hear from Obama following Kate’s death. “It is,” concurred Steinle. “With government and people’s agendas, people have blinders on. And there’s a blinder on many people in the White House.”

Steinle is right; he should not expect a call from the president. Obama only concerns himself in issues that are easily exploitable to advance the liberal agenda. The death his policies helped cause means nothing to him.