The prevailing narrative emanating from the left is that all men of color are innocent, all police are racist and that violent conflict is a healthy manifestation of very-justifiable anger. And now, according to a report from the Gateway Pundit[1], even President Obama is getting in on the race-baiting: 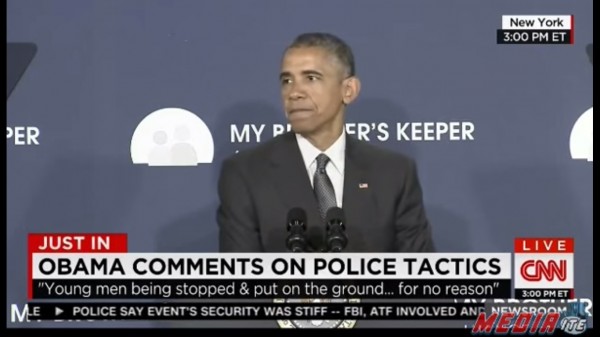 Barack Obama attacked the nation’s police today during his speech at the launch of My Brother’s Keeper[3].
Obama accused police of disproportionately stopping and arresting young men of color.

Of course, Barack Obama is once again using bogus statistics to push an agenda.

In a deeply personal response to outbreaks of racially motivated protests, President Barack Obama on Monday blamed a lack of opportunity in minority communities and harsher treatment of black and Hispanic men by police for fueling a sense of “unfairness and powerlessness.”

The country’s first black president called for a nationwide mobilization to reverse inequalities and said the cause will remain a mission for the rest of his presidency and his life. “There are consequences to indifference,” Obama said.

Helping launch a foundation to assist young minorities, Obama said the catalysts of protests in Ferguson, Missouri, and in Baltimore were the deaths of young black men and “a feeling that law is not always applied evenly in this country.”

“They experience being treated differently by law enforcement — in stops and in arrests, and in charges and incarcerations,” Obama said. “The statistics are clear, up and down the criminal justice system. There’s no dispute.”

As Zero Hedge[5] reported, the mortality rates among young black males is 80 to 90 percent higher than any other group.

Then there’s this[8]… There were 431 black killers of “whites” in 2014[9], compared to 193 “white” killers of blacks while blacks make up only 13% of the national population. There were approximately 6,000 black on black murders last year.

But then again, these are only facts. Facts appear to have little meaning for those who rely on pushing false and inflammatory narratives.

President Obama has long abandoned any notion that he is obliged to be all Americans’ president. More interested in pushing his radical agenda than serving as a dutiful public servant, Obama’s rhetoric has long centered on pushing false narratives with race at the heart of it. To Obama and his fellow radicals, America is an evil, racist place that cannot be improved, but only conquered. In six years, he and his dogmatic followers have done much to set discourse back 50 years and one can only shudder when considering what might be in store between now and 2016.