There is road rage, and then there is just plain crazy. Deirdre Orozco, 50, fits neatly into the latter category. We have insane video of her rage that makes your single-finger salute look like a curteous gesture.[1] 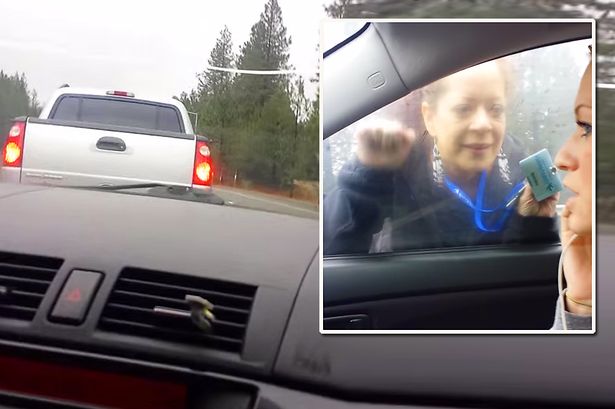 This is the moment an alleged serial road rage driver[4] appears to try to run a car off the road before posing as a cop and slamming her truck into the vehicle.

The footage shows Deirdre Orozco, 50, driving a silver truck and apparently tailgating[5] a white Mazda on Interstate 80 towards Auburn in California.

Driver Vanessa Gladieux and passenger Delanie Strykul are heard expressing their shock at the woman’s behaviour, which they describe as “crazy”.

Frustrated, Delanie makes a rude gesture, which the pair told the Sacramento Bee, sent Orozco into a rage.

At one point, Orozco gets out of her SUV and walks up to Vanessa’s car, banging on the window and flashing a badge, allegedly posing as a police officer.

Wary of the claims, Vanessa speeds off with Orozco in hot pursuit.

The alleged road rage driver then appears to slam her truck into Vanessa’s car in an apparent attempt to force the smaller vehicle off the road.

Throughout the footage, one of the alleged victims is heard speaking to police on the phone, and the incident ends when an officer arrives.

This lady needs serious mental help, and I still don’t understand why she chose to harass these ladies specifically. It doesn’t matter, however, because she’s clearly very ill. These ladies handled this situation very well with the options they were given.