During a recent press conference, a reporter asked Tom Brady a question about his friend and our Presidential nominee[1], Donald Trump. The inquiry was regarding Trump’s ‘locker room talk’ that had hit America like a rock late last week when the scandal dropped. 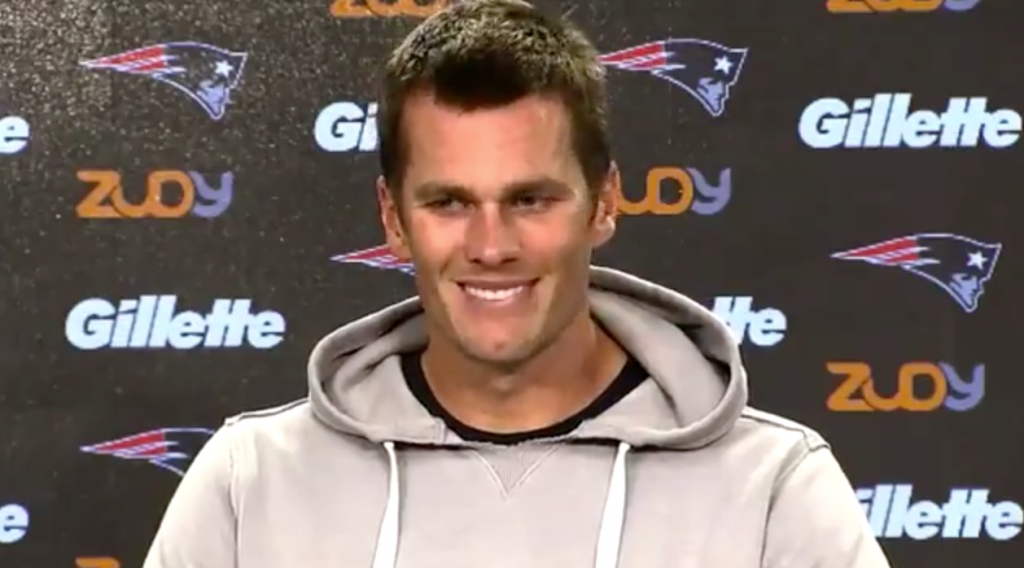 You know the scandal right? The tape that was released of Trump talking about a woman with Billy Bush back in 2005. That would be 11 years ago…and today it’s just as much of a scandal as it would have been then, except now he’s running for the highest office in the land. So…the guy is getting it 10-fold.

Many athletes have already come forward with their opinion on the matter, Brady is refusing to comment on the story and when this reporter approached him with their inquiry, he shut them down.

‘Tom, you have kids of your own – how would you respond if your kids heard Donald Trump’s version of locker room talk?’ one reporter asked.

Brady responded by smiling and saying ‘Thank you guys, have a good day’ before promptly walking off the stage.

I for one, think his response was perfect. He didn’t want to reply, or comment and he handled it with grace. Lesser people would have just walked away without any comment. Brady was polite and offered them a good day before making his exit from the interview.

Honestly though, Brady is an athlete, and interviews should involve questions about him and his skill to play the game. Coming at him with a question that is once again going to filth up the game with politics is not okay.

Can we just keep football about football and leave the politics out of it?

It’s hard enough already having to watch douchebags like Colin Kaepernick muddy up the game with his personal political stance on issues. It’s just bad form all the way around.

We, as Americans, want to enjoy the game, not pull all the stress of what is happening in the political world into it…it will no longer be a favorite pastime.

That fact is being proven by the 10% drop in viewership and it’s continuing to drop. Most likely due to the NFL boycott some say.

So what if Brady has been a friend of Trump’s since he was invited to judge the 2002 Miss USA pageant?

Last year, a “Make America Great Again” cap was spotted in his Patriots locker. Since then, he’s been catching a lot of flack.

Why people? He’s allowed to think for himself and use those thoughts to choose whom he will support. It’s just gotten so over the top ridiculous during this election that I hope one day people look back and become ashamed of their disgusting behavior through it all.

There is just ‘stupid’ running rampant everywhere you turn now in this here Obama’s America.

This is what Brady has said about Donald Trump:

‘Donald is a good friend of mine. I have known him for a long time. I support all my friends. That is what I have to say. He’s a good friend of mine. He’s always been so supportive of me… He’s always invited me to play golf and I’ve always enjoyed his company. I support all my friends in everything they do. I think it’s pretty remarkable what he’s achieved in his life. You’re going from business, kind of an incredible businessman and then a TV star, and then getting into politics. It’s three different career paths. I think that is pretty remarkable,’ Brady said.

Now because of his actions with the reporter who asked about something that had nothing to do with the point of the interview… Brady is catching a lot of crap for it.

People have taken to twitter to criticize the athlete and why?

For not saying anything at all!?! The stupidity with this is unbearable.

Sometimes I really hate this planet…and this would be one of those times.

I say good for Brady, for not engaging with ‘stupid’.

There is no hope in that. If you engage with ‘stupid’, it only drags you down to its level then beats you with experience.

Sometimes the best action to take is none at all. 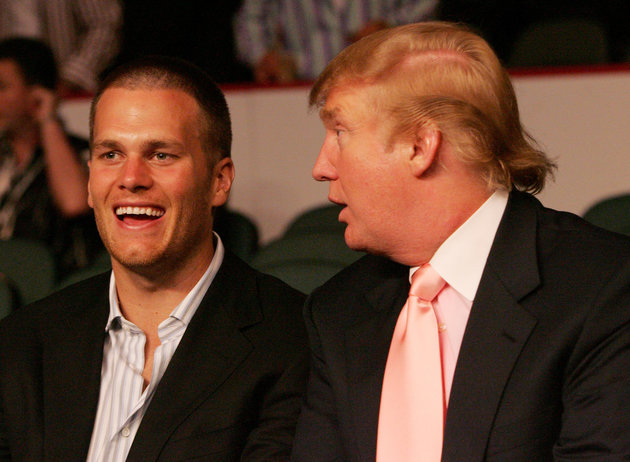