Universities are meant to serve as academic institutions that invite students to challenge their pre-existing ideas and notions and explore a world of different ideas. Unfortunately, the same left who clamors endlessly for a need for “diversity” is absolutely opposed to a diversity of opinions or beliefs. Few recognize this fact more than conservative journalist Katie Hopkins who was forced to witness the sad state of academia first-hand when she encountered a walk-out to protest her speaking.[1] 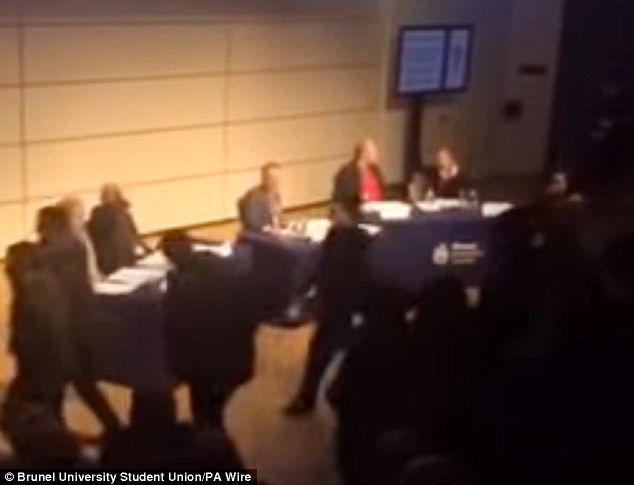 Was it something I said?

Hardly – because I’d only just introduced myself as part of a panel at Brunel University about the future of the welfare state when about 50 students stood, turned their backs in and walked out en masse, as part of a staged protest, actively encouraged by a member of the University staff who promptly tweeted his support:

Naturally I carried on regardless.

Because, for them, I have no regard.

Because they are already decided.

Or, as the Left-wing writer Frank deBoer observing the way students on campus look to silence anyone with an alternative view put it:

‘What’s more, we are all already decided and the thing you think is deeply ridiculous.’

After what happened to me at Brunel University I wonder if we no longer teach students how to think but what to think.

A terrifying number conform to one way of thinking. Not only do they demand that you comply with their view, but seek to deride and delegitimise anyone with an alternative opinion.

And it’s not just students. Remember the argument between Elton John and Dolce & Gabbana[4] earlier this year over the use of IVF for gay couples? Dolce & Gabbana were not supportive of the process.

The response from the LGBT community was typical: Boycott Dolce & Gabbana.

Don’t debate the issue – label it and shut it down. Those preaching tolerance suddenly became the most intolerant of them all.

And it isn’t just minorities who can play the offence card. Nobel Laureate Sir Tim Hunt fell victim to it earlier this year when he made a quip about the impact of women in laboratories[5], and was shamed from his profession.

Shunned by his peers and thrown out of UCL for sharing an off-the-cuff remark, his quote was played from the Twitter gallows as feminists threw rotten tomatoes, as a stark reminder to others that silence is easier than confrontation.

This generation of students raised on social media are fast to join crusades and shun traitors, and demand the head of the guilty served to them on a pike.

There have always been people who believe they have a right not to be offended. But in recent times their numbers have exploded, creating an Offended Young Nation.

Offence is no longer regarded as an emotional reaction. If someone is offended by something I say, they now have the right to bring a public charge against me because I have done something wrong and should be punished for it.

Students no longer debate. They label and slate:

All because my views are different from theirs.

I am so used to students trying to discredit me with labels, I even sent Brunel a list in advance, spelling them in the way those ill-educated by reality might choose to do:

Students on American and British campuses are plagued by this lazy thinking. At Yale a Professor and Associate Master is under heavy fire for tactfully suggesting students should wear whatever Halloween costume they felt comfortable in[6].

The Yale offendatrons screamed out the label of first choice – racist – and want her fired because she wrote: ‘If you don’t like a costume someone is wearing, look away, or tell them you are offended. Talk to each other. Free speech and the ability to tolerate offence are the hallmarks of a free and open society.’

Sadly I fear our young society is a lot less free than we might hope.

Encouraged by Left-leaning tutors, students do not wish to open their minds to society. They want to hear what they have already decided is true.

It might explain why Brunel University students who wouldn’t listen to me thronged off-site to hear the wisdom of hate-preachers Uthman Lateef and Doctor Fikry.

Lateef has publicly stated he hates homosexuals and Dr Fikry told the students: ‘Killing the Sunni is to raise your rank in Paradise, raping a Sunni woman is a matter that pleases Allah.’

Not one student walked out of these talks – presumably because these speakers aren’t whitesplaining or this is accepted thinking at Brunel and does not cause offence?

About my own talk, one member of the audience later tweeted:

Another came to apologise on behalf of his fellow students.

So to those who stayed and debated openly, I am grateful. Not because you stayed to listen, but because you give me hope our future is not entirely populated by closed minds.

The world is bitterly divided between “right” and “left.” While the right often disagrees with modern-day liberalism, it is the left that preaches a shocking belief that opposing viewpoints should not be tolerated.

It is an inescapable irony that those who clamor loudest for tolerance are they, themselves, the most intolerant to opposing perspectives.