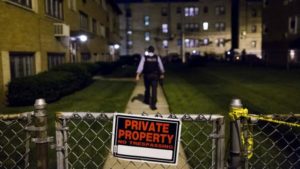 [1]What happened in South Carolina was horrible. What happened in Newton Connecticut was also horrible and what happened in Aurora Colorado was equally as horrible as the first two. However, mass shooting happen every week in our urban cities and it never gets acknowledge by the national media as a problem. How come the #BlackLivesMatter crowd don’t seem to get upset about this? You already know why!

Chicago Tribune[2] reports tt started when three men were shot, one fatally, by gunmen who jumped from a maroon van in the Chatham neighborhood Thursday afternoon.
Seven hours later and just a mile away, two men were shot in apparent retaliation, one of them fatally, by a man who knocked on their door, police said.

The revenge shooting was part of a burst of violence that killed three people in all and wounded 17 others overnight in Chicago, a toll usually seen on weekends. Nine of the people shot were in the Englewood neighborhood on the South Side.

“What is this?” asked a woman as she came upon the Chatham shooting scene. “What is the world coming to?”