‘What Have I Come Up With? Health Care’: Obama Boasts to Six-Year-Old Inventors At White House Science Fair

President Obama will forever be known for his namesake “achievement”: Obamacare. The socialist takeover of the American healthcare system will, if left intact, prove both costly and deadly and the effects of the disastrous legislation will linger long after Obama has shuffled off into retirement. According to a report from the Daily Mail[1], however, Obama recently bragged to young inventors of his Frankenstein. 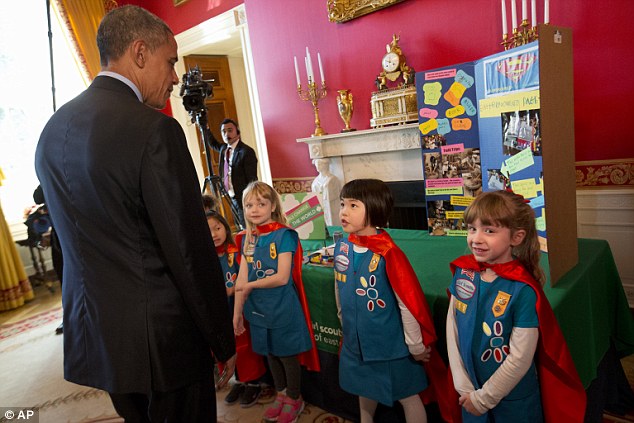 Barack Obama today took a chance to boast about healthcare reform to a group of six-year-old girls – though admitted that Obamacare is not as impressive as a device for turning the pages of a book.

The president, put on the spot by a crowd of Oklahoma Girl Scouts to name something he’d come up with to match their device, plumped for his much-touted healthcare reforms.

Obama, who was touring exhibits at the annual White House Science Fair, made the jokey exchange before pledging $240million in federal dollars to boost the study of science and technology.

He seized on the Lego page-turning device, which was being exhibited by Emily Bergenroth, Alicia Cutter, Karissa Cheng, Addy Oneal, and Emery Dodson.

The girls, all aged six, are members of a Girl Scout troop in Tulsa, Oklahoma, and developed their contraption to help those who are paralyzed or arthritic read more easily.

When the Commander-in-Chief asked how they had come up with the device, one answered that ‘a brain-storming session’ was the answer, then asked whether he had any to his name.

Obama conceded: ‘I have had a couple of brain-storming sessions, but I didn’t come up with anything this good.’

‘See, you guys are already better brain-stormers than I am.’

The persistent Girl Scout followed up her question, asking: ‘What did you come up with?’

He replied: ‘I mean, I came up with things like, you know, health care.

‘It turned out OK, but it started off with some prototypes.’ His flagship health legislation is five years old today.

The girls were among 35 young science fair winners who came to the White House to show off their inventions, which ranged from spinal implants to computer password technology.

In fact, my position is not merely conjecture; Democrats had ample opportunity to showcase their shared “achievement,” but instead, the smart ones ran from the stink of socialized medicine and even then, many who ducked and dodged were run out of office despite their severing of association with the disastrous law.