We are at war. The left can try to deny this fact, but it doesn’t make it any less true. We are at war with radical Islam and if we cannot even come together as a nation to honor those who have been slaughtered by these zealots, we will never win against the determined enemy facing us. The recent outrage at the University of Minnesota[1] illustrates how dominant sickening political correctness has become. 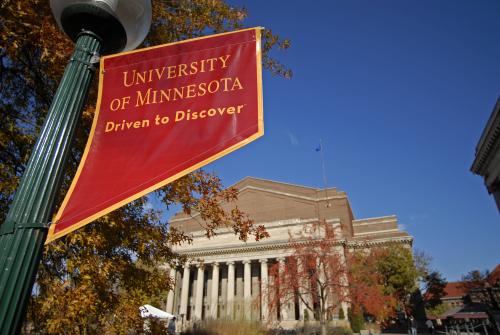 I’m not going to spend a lot of time on this story, because perhaps you already know about it. But this is why the West is losing against Islamo-fascism and Islamic jihadists.

As reported by Campus Reform[3], “On Tuesday, November 10, the Minnesota Student Association (MSA)–the undergraduate student government at the University of Minnesota-Twin Cities (UMN)– rejected a resolution for a moment of recognition on future anniversaries of the September 11, 2001 terrorist attacks. Theo Menon, the student group representative to MSA for the College Republicans (CRs) at UMN, introduced the resolution; MSA’s forum voted against it 36-23 (with three abstentions).

The proposed resolution pointed to the university’s lack of any sort of commemoration regarding the attacks on 9/11. It then called for a campus-wide moment of recognition on every September 11 from now on. “I wrote this resolution because I think we need to recognize the victims of this world-changing event,” said Menon, “The innocent men, women, and servicemen who died on that day deserve to be honored.”

“This resolution was non-controversial and was supported by the MSA’s President and Vice-President,” said Amundson, “However, several members, in exchanges with CRs rep Theo Menon, were militant in their opposition to it due to a perceived bias toward Muslims.” At-large MSA representative and Director of Diversity and Inclusion David Algadi voiced severe criticism of the resolution. He also made sure to emphasize 9/11’s status as a national tragedy in his response.

“The passing of this resolution might make a space that is unsafe for students on campus even more unsafe,” said Algadi, “Islamophobia and racism fueled through that are alive and well.”Algadi added that holding a moment of recognition over a tragedy committed by non-white perpetrators could increase racist attitudes on campus, asking, “When will we start having moments of silence for all of the times white folks have done something terrible?”

And so there you have it, the insidious progressive socialist moral equivalency. We cannot remember the victims of 9-11 because it will offend and threaten the “safe space” for Muslims. In that case, you have to ask, would these students agree with a remembrance of Pearl Harbor? Why, of course they wouldn’t, because it would cause offense to Japanese students and unless we remembered the internment camps no — so that means no remembrance of the Bataan death march either.

Heck, we should never remember any victory of America over tyranny and evil unless we stick a hot iron in our eye remembering our own faults. And so consider this, would these spoiled brats support a remembrance of the Paris Islamic terror attacks? Well, I would say not, unless the French also did likewise for their terrible colonial conquests.

This is why the enemy gains leverage. These “stuck on stupid” kids who want to revise history in a light that doesn’t hurt anyone’s feelings. So we cannot hold a remembrance of the modern day Pearl Harbor in America because someone’s “safe space” would be threatened. And what chucklehead came up with this “safe space” foolishness in the first place?

So remembering 9-11 fuels “Islamophobia?” Well, sorry to tell little Davy this, but since he’s so concerned about folks being offended, maybe he should be tied down and forced to watch the coverage of Americans leaping to their deaths instead of burning alive. I think they were more than offended. And to know there were people who cheered and celebrated that Islamic terror attack offends me.

You have to ask if these students would refuse to allow wounded warriors from Iraq and Afghanistan on campus to talk about overcoming their injuries and carrying on with their lives? After all, their mere existence could fuel racism – we’d need to find some people who’ve been adversely affected by “times white folks have done something terrible.”

Who are the parents of these delusional little rascals? Better question, where are the parents? Well, I suppose they share the same sentiments — of course the campus professors do. Contrast this, a 26-year-old Islamic jihadi is the mastermind behind the barbaric and savage attacks in Paris. Here in America we have these twenty-year-olds worried about free tuition and “safe spaces.”

Message to you chuckleheads: that 26-year-old ensured some 130 souls were killed and 300 wounded in what they thought were “safe spaces.” So you young puppies keep being brain dead. It will be up to better people than yourselves to ensure you don’t wake up dead.

To David Algadi, Barack Obama, and their ilk, let me leave you with this simple quote from John Stuart Mill:

“War is an ugly thing, but not the ugliest of things: the decayed and degraded state of moral and patriotic feeling which thinks that nothing is worth a war, is much worse. When a people are used as mere human instruments for firing cannon or thrusting bayonets, in the service and for the selfish purposes of a master, such war degrades a people. A war to protect other human beings against tyrannical injustice; a war to give victory to their own ideas of right and good, and which is their own war, carried on for an honest purpose by their free choice, — is often the means of their regeneration. A man who has nothing which he is willing to fight for, nothing which he cares more about than he does about his personal safety, is a miserable creature who has no chance of being free, unless made and kept so by the exertions of better men than himself.”

Davy, thank God this country is the home of the brave, so we can allow people like you to live in the land of the free — and yes, free to say really dumb stuff.

When America fought in World War I, even the most-ardent anti-war voices (like Henry Ford) pitched-in to help America. In World War II, even ardent isolationists like Charles Lindbergh aided the effort. But in modern-day America, though we remain at war with radical Islam, there are still many who cannot seem to get behind America and root for her victory.

I’ve never been an “America: love it or leave it” absolutist, but I’ll admit that there are instances where that mantra definitely should apply.