When a Knife-Wielding Man Threatens Others, this Retired Cop Pulls His Gun. How Witnesses React is Striking

Concealed carry holders should not seek-out trouble, but one of the inarguable benefits to carrying a concealed weapon is the ability to intercede on behalf of public safety. A recent report by IJReview[1] details the efforts of a retired police officer and the community’s shocking reaction to his heroism: 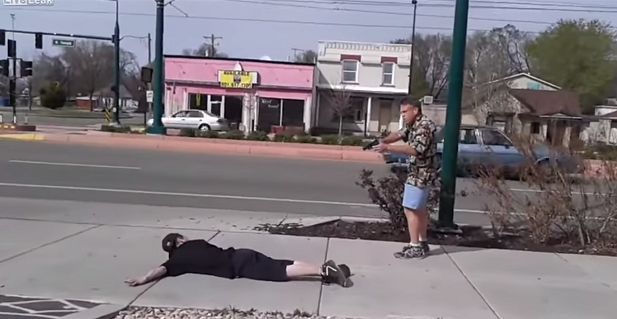 In Salt Lake City, a retired police officer spotted a man on the sidewalk wielding a knife. Rather than drive on by, he got out of his vehicle and brandished his firearm.

Nick, whose last name is being withheld in this story, did what his training and instincts told him to do: Intervene in the potentially deadly situation and attempt to defuse it.

The incident was reported[3] by WGN in Chicago:

The incident occurred on March 17 north of the city.

“I was just in my car on North Temple, I saw a guy pull a knife on another guy, a fight ensued, the guy with the knife was swinging it several times at the unarmed person,” said Nick, the civilian, who declined to give his last name.

Nick, a retired police officer, decided to step in and pull his gun on the suspect.”

“I see somebody in need of help it’s just the right thing to do, the wrong thing to do would of been to turn my back and have somebody be stabbed because I didn’t do anything.” Nick, citizen

“I told him to lay down on the ground and he stayed there,” Nick said.

Witnesses had no idea was what happening. They began demanding that Nick put down the gun. A witness videotaped most of the incident.

During the incident, Nick was second-guessed by bystanders who were likely unable to fathom why someone would actually do something about the situation, let alone pull a firearm.

“This guy’s got a knife, you guys just back off,” Nick tells two men approaching him.

“Or you the police or what?” a man asks him.

“Let’s see the badge, just because you got a gun, that don’t mean sh*t,” another tells him.

The video is striking because the witnesses seem quite content to sit idly by recording the knife-wielding man in a possibly violent stand-off, but had qualms about a man putting an end to it with his firearm.

While Nick implies that several had their camera phones recording the incident, a video of the altercation eventually coming to light on social media, but reportedly not one of them called the police.

The report is emblematic of a bystander phenomenon that is seemingly fueled further by social media. An infamous incident[4] at a McDonald’s in Brooklyn this March involved dozens of bystanders watching and even cheering on, while a 15-year-old girl was beaten by several thuggish girls.

As a general rule, if a madman is going to wave a knife around and threaten people on a public sidewalk, he should be prepared to have a gun pulled on him and the community is just going to have to understand.