White police officer shoots and kills white man for grabbing his gun, but that won’t be the headline 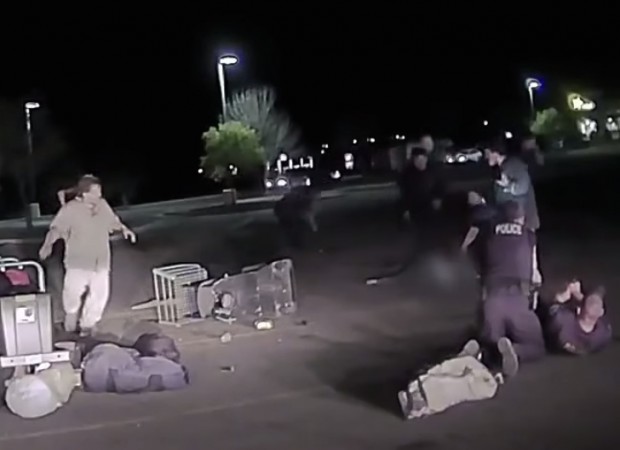 [1]If a white police officer shoots a black man, it makes headlines everywhere, inciting protests and violence claiming racism. If a radical Islamist commits terrorist acts, the mainstream media won’t identify the Islamic connection. But, if someone who identifies as a Christian rock band is involved in an altercation with the police? You betcha the Christian aspect is identified![2]

The Right Scoop pointed out this discrepancy,

Social media is going crazy over a story where a family got into an altercation with police outside a Walmart and one was shot and killed. But rather than point to the fact that this is an instance where cops killed a white man for reaching for a cop’s gun, they’re focusing on something else:

Yes it was a family and music band who posted Christian messages on their Facebook page. So THAT detail is important, but it’s NEVER important when a Muslim beheads someone. Those are the RULES of journalistic integrity, people!

The Blaze[4] relayed the story of how it went down,

The altercation started when a female Walmart employee tried to use the restroom at the Walmart and was shoved away by the family, the Republic reported; two of the Gaver brothers told police they were guarding the bathroom while their mother, Ruth, used it.
…
“We need to separate these folks and talk to them,” an officer says near the video’s start as he and other officers pull up to the scene where two cops were already speaking with the family.

“No, you’re not going to separate me from my family,” one of the family members immediately responds.

Then the fists, boots and Tasers start flying in a vicious, chaotic melee.

In the gut-wrenching, 9-minute long video, cops repeatedly call for the family to get down and stop fighting, but various people keep punching and tackling police.

A Walmart employee fights against the family, saying, “No!” repeatedly, but his pleas go unheeded.

“Oh Jesus, my family!” women can be heard weeping.

As police officers are choked and pinned to the ground, the situation grows desperate and police eventually start firing their guns.
…
The March 21 fight ultimately left 21-year-old Enoch Gaver dead, and David Gaver with a gunshot wound, the Arizona Republic reported.
…
The Gavers were reportedly well known in Boise, Idaho, where three of the family members performed in a Christian band called “Matthew 24 Now.”

Hicks, the officer who fired the fatal shot, has returned to duty as the police chief determined his actions were justified by the dash cam video.

Keep your eye on the news over the next few days and count how many times  you see the word “Christian” regarding this incident in the headlines. We have a president who will not use the words “Islamic” or “Muslim” in regards to the massive annihilation of people occurring all over the world, yet a brawl that was likely provoked by drinking, sadly resulting in the death of one of their own, will be brazenly labeled as Christian. Watch the horrific video below.