WHOOPS: Thug tries to rob “gun nut” convenience store manager with his finger under a shirt

Chance Morman carries a concealed gun everywhere but has never looked forward to the day he might have to use it.That day came Saturday, when the manager at Meineke Car Care Center in south Fargo drew his handgun to chase away a robber who pretended to have a gun and demanded cash, police said. What the robber didn’t bargain for is someone calling his bluff: 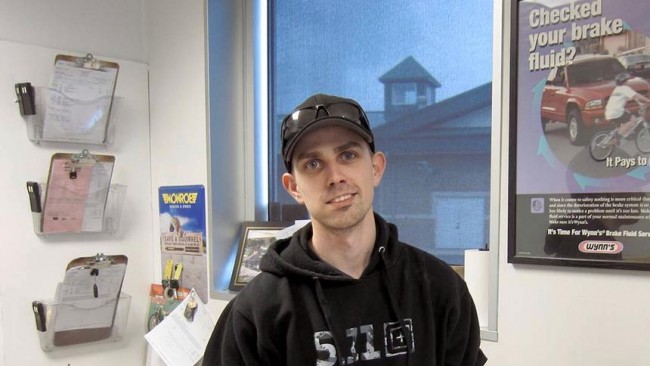 “It’s just one of those things you prepare for,” said Morman, 22, a self-professed “gun nut.”
Morman and his fellow employees were in the back of the shop when the man entered the front lobby early Saturday afternoon and started acting suspiciously, police and Meineke employees said.
“So I walked up and I was like, ‘How can I help you, man?’ ” Morman recalled.
The man, who police believes is 32-year-old Eugene Fredrick Quinnett, responded by putting his hand under his shirt and pointing as if he had a weapon, Morman said.
“That’s when he said, ‘Give me all the money before I blow your [expletive] head off,’ ” Morman said.
Unlike Quinnett, Morman was actually packing heat.
When Morman drew his Smith & Wesson M&P40, Quinnet got “a blank look on his face,” Morman said,
“He kind of like hesitated for a second,” Morman said. “He looked at me strangely and just kind of turned around slow and took off out the door.”
Morman’s coworker, 21-year-old mechanic Andrew Salsman, said he followed Quinnett to the nearby Motel 6.
Police were called at about 2 p.m. and caught Quinnett as he exited a motel side door, Fargo police Sgt. Mark Lykken said.
Quinnett was booked at Cass County Jail on suspicion of criminal trespass and robbery with threat of a weapon.
Morman said he never wants to use the concealed weapon he’s had for a year, but he would “rather have it, and never have to use it, than not have it the one time I need it.”
The incident could have taken a fatal turn if Morman had actually seen a weapon, he said.
“I gave him the benefit of the doubt,” Morman said. “If he would have pulled out a gun, yes he would have got shot. If he had pulled out any kind of a weapon he probably would have got shot. But until I see, I’m not going to, you know, jump to a conclusion and kill somebody.”
As it turned out, police found no gun when they arrested Quinnett.

Lykken said employees of a business generally should just hand over the money during a robbery.
“In this particular case it worked out, but in other cases, it can escalate the situation,” he said.
“We would suggest it’s the business’s money and to avoid any type of injury you just give up the money,” he said, and “be the best witness you possibly can.” For Morman, he was just glad that nobody got shot.

“Realistically, I don’t want to have to take somebody’s life,” he said. “But like I say, if it’s mine or theirs … I’m picking me, every time.” Good words my man. Keep standing up and exercising your 2nd Amendment rights.