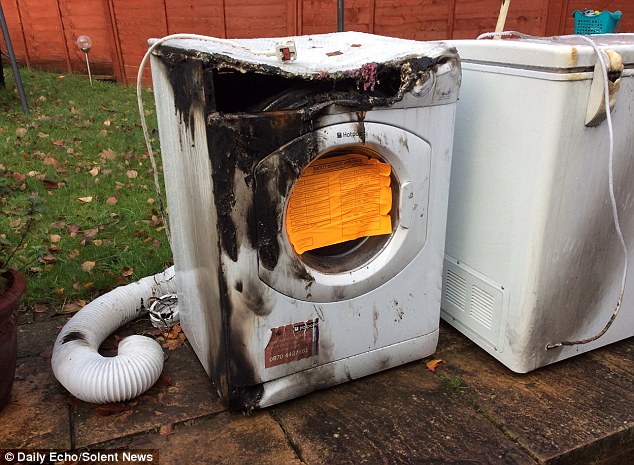 [1]You know how your kids always nag you to turn off appliances, whether it’s hairdryers, curling irons or toasters? Well, did you ever think your washer and dryer should be turned off? I never did and never have. But this horrific story might make you think twice.[2]

Families throughout Britain were in shock this week after it was revealed their innocent-looking tumble dryer — that kitchen and laundry-room staple — could be a lethal fire hazard.

Engineers are being sent to modify possibly millions of Hotpoint, Indesit and Creda machines bought between April 2004 and October 2015. And the news prompted a rush of Mail readers to share their horrifying stories. Here are just a few of them:

Kate Wright, 32, a waitress, lives in Hythe, in Kent, with her husband Chris, 36, who works in sales, and children, George, seven, Ava, six, and Edward, two. She says:

The night I came home to find our house on fire is something I will never forget.

It was November 2013, and we had been to a fireworks display. Chris had gone to pick up our elder children from their uncle’s, and I went home with our six-week-old baby, Edward.

As I pulled onto the drive, I heard an alarm going off. I thought we had been burgled. I got Edward out of the car and dashed to the front door, but as I pushed it open, smoke billowed out, followed by a wave of intense heat.

I rang my husband and the fire brigade, and neighbours were gathering. One took Edward for me and two men kicked down the back door and threw water on the flames.

The heat was so intense that both the kitchen windows exploded outwards.

The worst part about it? Their cats, which were normally outdoors cats, were inside due to the fireworks occurring and lost their lives. These tumble dryer manufacturers need to be held accountable and let the free market account for the fires they were responsible for causing.