THERE WILL BE BLOOD!: John Boehner says Republicans won’t repeal and replace Obamacare 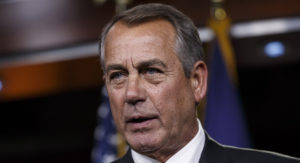 If Republicans just tinker around the edges of ObamaCare, then there WILL BE BLOOD! That’s not what voters put Trump in the White House for. As usual yellowbelly GOPers are misreading the base of the party at their own political peril.

Politico[2] reports former House Speaker John Boehner predicted on Thursday that a full repeal and replace of Obamacare is “not what’s going to happen” and that Republicans will instead just make some fixes to the health care law.

Boehner, who retired in 2015 amid unrest among conservatives, said at an Orlando healthcare conference that GOP lawmakers were too optimistic in their talk of quickly repealing and then replacing Obamacare.

“They’ll fix Obamacare, and I shouldn’t have called it repeal and replace because that’s not what’s going to happen. They’re basically going to fix the flaws and put a more conservative box around it,” Boehner said.

The former speaker’s frank comments capture the conundrum that many Republicans find themselves in as they try to deliver on pledges to axe Obamacare but struggle to coalesce around an alternative.