There is a special place in hell for those who needlessly and callously torture animals. One Virginia woman did not torture her dog, per se, but instead, allowed the dog to be drained of his blood by fleas that sucked him dry. Now, because of her treatment of the poor pooch, the woman is facing jail time.[1] 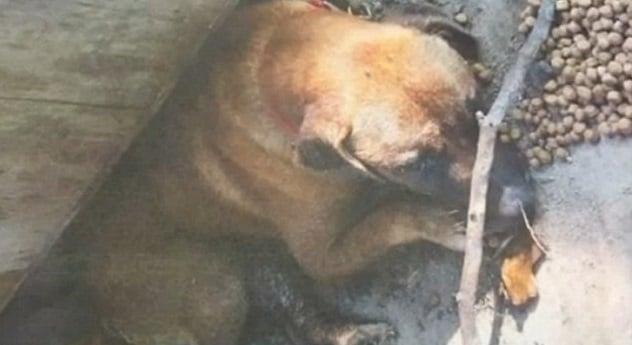 A Virginia woman has been sentenced to six months in jail after she left her dog tied up outside, allowing it to be slowly and painfully killed by fleas in what police are calling one of the worst cases of animal abuse they’ve ever seen.

Josefina Baldera Soils was convicted on a misdemeanor animal cruelty charge stemming from an incident on September 9 when a neighbor found her mixed-breed dog, Golden, tethered to his kennel outside in the rain and wailing in pain.

Amanda Hios, who lives at the Country Aire trailer park in Prince George’s County, said Solis’ pet was crying for at least eight hours that day.

When she went outside the check on him, she found the animal huddled under his dog house and crawling with thousands of fleas.

‘I had never heard an animal so sad in my life,’ Hios told the station WTVR[3].

Hios summoned an animal control officer, who was also taken aback by the state of the dog.

‘It was an astonishing amount of fleas on the dog,’ Prince George County Animal Control supervisor Job Greene said.

The dog appeared listless, was having difficulty breathing and was too weak to lift his head off the ground.

Golden was rushed to a veterinary clinic but died en route from blood loss.

A necropsy later showed that the canine succumbed to anemia, having most of his blood drained by the hordes of fleas blanketing almost every inch of his coat.

On Monday, Ms Solis was convicted and sentenced to jail time. As part of her punishment, she was also required to pay a $210 fine and ordered not to possess any animals in the future.

Her neighbor, Amanda Hios, deemed the sentence too light.

‘I don’t think six months is enough time,’ she said. ‘She should have gotten more.’

It’s unbelievable that she only received six months. Hopefully, animal-loving inmates are made aware of her crime during her stint.