Here’s another story to add to your “WTFile.” A woman comes home to find a snake with a suspiciously cat-sized bulge in its stomach. Come to find that that bulge was the snake’s latest meal; the woman’s pet cat. I’m sure you can understand her shock and horror. So she does what anyone would do in that situation, she called the police.

I mean, what else would you do when a 17-ft python invades your space and eats your pet? Discuss the weather? 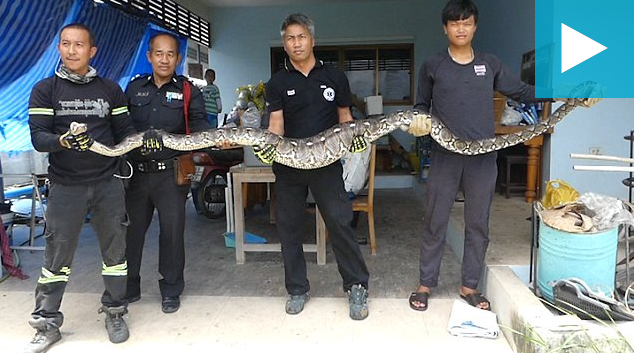 After finding himself an unwanted guest in a home in Pathum Thani, Thailand, a huge python discovered a furry, four-legged snack walking about. His unsuspecting meal was Bobo the tabby ginger cat, which belonged to Saowarak Charoen, 59.

After making a quick lunch of poor Bobo, the lengthy reptile slithered up under the sing so he could digest his catch in peace. Unfortunately for him, the woman who owned the home had other plans.

When she discovered her unwelcome houseguest, Charoen called the police. Two officers, three animal rescue workers and even a reporter arrived at her home to retrieve the sated snake. But Saowarak wanted her kitty back, and wasn’t about to let the sneaky serpent get away with his meal.

The men removed the snake from the home and then twisted it to force the cat out of its stomach.

Oh yeah, and it was all caught on video.

I’m not gonna lie, it’s pretty gross and definitely not for the faint of heart. Nope nope nope. Watch at your own risk.

Unfortunately, little Bobo didn’t make it, as you can imagine. The good thing is that the homeowner got his body back and was able to give him a dignified burial in the back yard.

Police later released the hungry snake back into the wild, where he is sure to find more unsuspecting fuzzy critters to lay his hands… er… fangs, on.

As a cat mommy and a lover of all things fluffy, I am heartbroken for this poor housecat and his owner. There is little worse than having something you love taken from you suddenly.

She does care for two more cats, but this is one of those things and it doesn’t matter how many replacements you have, it’s still going to bother you. Aside from eating the cat, I would be significantly bothered that such a large serpent managed to find its way into my home.

This would make me paranoid.