Hillary Clinton just gets worse and worse with every passing day. How anyone can fathom a vote for this monster is BEYOND me.[1] 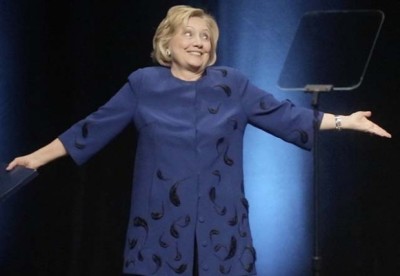 If you have followed Hillary Clinton on the campaign trail at all you know that strange things happen all the time with her.

In fact, you can find something unusual at just about every campaign stop she makes.

The latest example was today at a campaign event where a speaker was reciting the pledge of allegiance and appeared to intentionally skip the “under God” part.

Just kidding, she stood there and laughed like a maniac.

That’s the nominee for president from the Democrat Party ladies and gentlemen.

What was the lady in red even trying to prove there?

Did she think it would be a funny joke to stick it to God in front of all those people?

You can even hear some people shouting at her for skipping it.

Seriously, this is just SICK:

Another day in Hillary land.