A British mother has disclosed she split with her boyfriend for her pen pal prisoner who is on death row in America. As insane as that sounds, it’s true. But hey, who am I to judge the love[1] in someone’s heart?

Someone who’s really good at judging others. 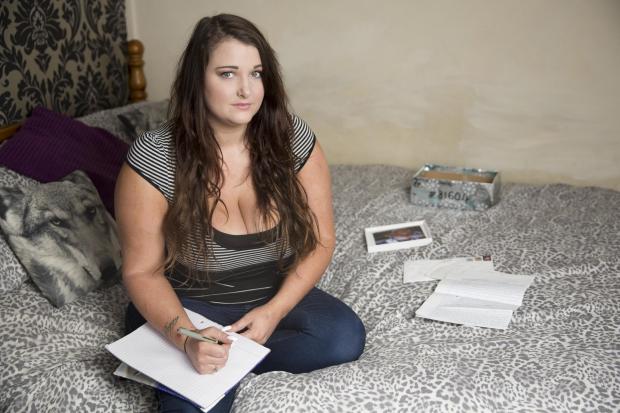 Katie Menham, 25, from Malmesbury, Wiltshire, has exchanged ‘dozens’ of letters with convicted killer Julius Bradford, 31, since January – and is now fighting to get him a retrial so they can be together.

Bradford has been on death row in High Desert State Prison, Nevada, since 2004 – after he was found guilty of first-degree murder and attempted robbery.

In court it emerged he and two accomplices had ambushed a 48-year-old father of seven, attacking him and attempting to rob him before shooting him dead.

Despite Bradford’s violent past, Katie who has a four-year-old son, Alfie, says she has developed ‘a connection’ with him.

So much so that, last month, she split with her boyfriend of two years to focus on her blossoming relationship with the inmate – who is locked up 5,000 miles away.

Katie, a counselling and psychotherapy student, said: ‘I never thought you could have such a strong bond with someone you have never met but this is really special. I can’t explain it but it’s so powerful.’

‘I don’t expect everyone to understand it and I’m not condoning Julius’ crimes, but I take people as I find them – and what I see is an intelligent, thoughtful person who got into the wrong crowd as a teen.

‘In the end my boyfriend couldn’t hack the time I was spending writing to Julius, so we split.’ Now, new evidence has emerged in Bradford’s case and he has submitted an application for appeal, meaning he could face a retrial next year.

Oh, sweetheart…you are a bit, shall we say, discernment impaired, aren’t you? Your boyfriend couldn’t ‘hack’ that you were writing to another man who’s 5,000 miles away and locked up in a prison. A man who happened to have murdered another human being…