Lost in the media hype surrounding the addresses of Presidents Barack Obama and Vladimir Putin to the United Nations General Assembly on Monday was a bombshell claim by the president of Argentina[1]. Obama is finally being called out! 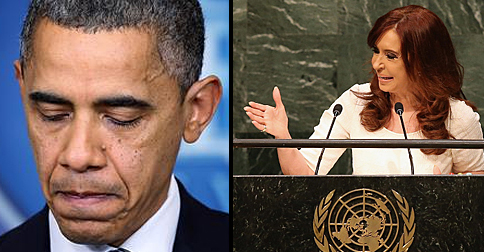 President Christina Fernandez de Kirchener announced that her nation had been approached by an Obama administration official with a request that Argentina provide enriched nuclear fuel to the Islamic Republic of Iran in 2010.

The official in question was Gary Samore, former White House Coordinator for Arms Control and Weapons of Mass Destruction, who did not dispute the seemingly outrageous claim and has been open about his opposition to the nuclear agreement currently worked out between Obama and Iran.

Kirchener said that Samore wanted Argentina to provide nuclear fuel to Iran, ostensibly to counter Iran’s excuse that they needed nuclear fuel for their reactors, removing the impetus for them to continue their own uranium enrichment program.

Kirchener stated that the deal fell through when her government asked for the request in writing, to abide by proper protocol, at which point the issue was dropped and Kirchener never heard from Samore again about it.

For his part, Samore released a statement admitting that he had in fact traveled to Argentina in 2010 and made the request, though he insinuated the incident was no big deal.

In fact, Samore went on to explain how after Argentina balked at the deal, he subsequently approached France and Russia with a similar proposal in which Iran would send their low-enriched uranium to Russia, which would further enrich it before sending it along to France.

France would in turn finish converting the enriched uranium into nuclear reactor fuel, sending it back to Iran for its own use, ostensibly preventing the Islamic republic from weaponizing its uranium stockpiles.

This deal fell through as well, according to Samore, leading to the 2010 U.N. resolution that increased economic sanctions on Iran, ultimately bringing them to the bargaining table for the horrible deal Obama eventually worked out with them this year.

The White House did not immediately respond to the potentially treasonous allegations.

Please share this on Facebook and Twitter to help spread this amazing accusation by the Argentine president that the Obama administration approached her nation with a proposal to provide enriched nuclear reactor fuel to the Islamic Republic of Iran in 2010.

Iran remains committed to destroying the United States, as well as Israel…we’ve all seen them chanting, we’ve all heard their threats! It has the blood of countless American soldiers stained on its hands.. It is engaged in war crimes in Syria and other places…raping, torturing, men, women, and children…cutting off heads, throwing people off buildings! Yet Obama is committed to elevating and supporting the Iranian regime… Why hasn’t the word on Obama committing treason ever resulted in action taken against him? Because…it hasn’t yet gone viral. I think you know what to do now.