Is this the worst parking ever? Female driver spends four minutes trying to drive into parking bay before scraping car and asking passer-by to park it for her 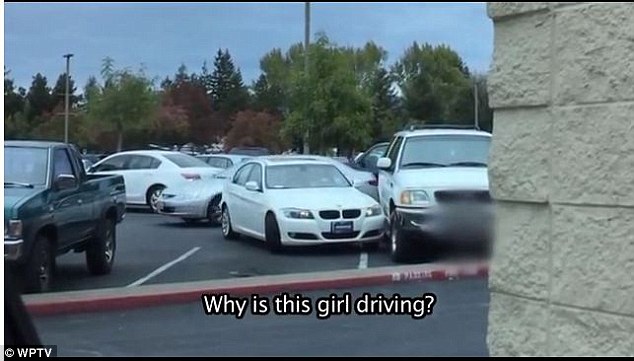 It is often joked that women drivers are less competent than men, which is, of course, wildly incorrect.

But one unnamed woman set the fairer sex back a bit with driving that has been branded the ‘worst in the world.’

In a hilarious video shot in a parking lot in the Bay Area in California, a woman manages to turn what should have been a quick maneuver into a four minute ordeal

The clip shows the woman drive into the spot at a bad angle after she went the wrong way down a parking lot.

Once in front of the parking space, the woman, who is fittingly dressed in bright pink, constantly turns the wheel the wrong way.

And after struggling for close to four minutes she waves over a young man to help her out.

She gets out and the man can be seen climbing into the driver’s seat to offer his help. He then manages to pull into the space in a record 40 seconds, and all is well.

After she finishes shopping, the woman attempts to pull out of the spot, and, once again, has a horrible time. She even manages to scrape the side of the white truck which is parked next to her.

Yet, showing sheer tenacity, the woman driver continues to turn the wheel the wrong way and after another three minutes of trying she finally manages to reverse out of the spot and drive away.

Ladies, don’t be this gal. learn to operate your car and don’t rely on a dude. This is just embarrassing. #lamedrivingfails