If only they could take him off our hands for us! They love him so much, that they’re replacing photos of Che Guevara with photos of Obama[1]. 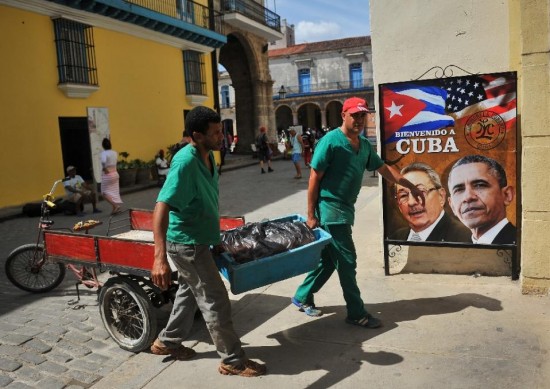 A poster of US President Barack Obama popped up in central Havana Thursday in a revolutionary change to the portraits of Che Guevara and other communist leaders plastered around Cuba.

Cubans are used to living under the gaze of billboards, paintings and other depictions of Fidel Castro and his comrades in arms Che and Camilo Cienfuegos, as well as 19th-century independence leader Jose Marti.

But three days before Obama arrives in Havana for the first visit of a serving US president in nine decades, a restaurant entrepreneur has broken the bearded revolutionaries’ monopoly.

The poster, put up in the street near a cathedral that Obama is expected to visit after his arrival Sunday, is a montage showing Obama alongside Raul Castro, the Cuban president and brother of Fidel.

“Welcome to Cuba,” the poster says under the Stars and Stripes and the Cuban flag.

Miguel Angel Morales, owner of La Moneda Cubana restaurant, said putting up the poster was a big step in a country where the United States has been long been the enemy and where political imagery is tightly controlled.

Glad they like Obama, because the American people sure as hell don’t!

Not to mention, how embarrassing is this? Obama is a hero to the oppressed people of Cuba? Yeah, what an accomplishment to have!