The left loves to harbor a tremendous double-standard on issues of race. Not-so-coincidentally, the same party that asserts that blacks need preferential treatment in hiring is the same party that stood as resistors to the abolition of slavery and to the institution of basic civil rights. So, it is hardly surprising to discover that the Grand Wizard of the KKK has offered an endorsement for Hillary Clinton.[1] 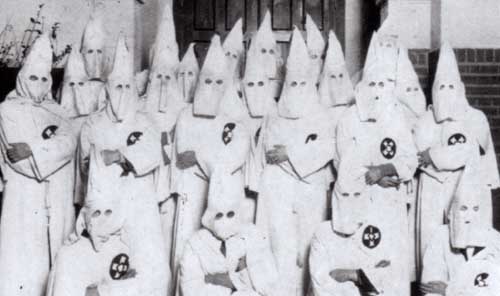 However, a Grand Dragon in the KKK, Will Quiig, has just switched his support from Trump to Democrat candidate Hillary Clinton.

I wonder what the Left will have to say about this?

A prominent white supremacist who was supporting Donald Trump has switched his support to Hillary Clinton, he said on Monday.

Will Quigg, a grand dragon with the Ku Klux Klan’s California branch, said he supports Clinton because she has a “hidden agenda.”

“We want Hillary Clinton to win. She is telling everybody one thing, but she has a hidden agenda,” Quigg, a grand dragon of the KKK’s California chapter who is responsible for recruitment across the Western United States, told the Telegraph[4].

He did not elaborate on Clinton’s “hidden agenda,” saying: “I cannot reveal my sources.”

“It’s my opinion—if you know what I mean, wink, wink. I don’t want her to come back and say I’m slandering her,” he said.

This is sure to open a whole bag of worms – if the Left and the media run with the story.

Who are we kidding, though? Democrats have always been the party of racists, so this endorsement fits quite perfectly.

So, when will the left emerge from the woodwork to shout and protest and demand that Hillary denounce this endorsement?

When will the media emerge to tacitly connect the endorsement to Hillary to smear her as a bigot, just as they did with Donald Trump?