WOW: Moment When Car Goes Up In Flames- But It’s What Happened Before That, That’s Making News!

After watching a driver lose control of a tractor trailer in a fire-ball crash on the Pennsylvania Turnpike, two fellow truck drivers made the selfless decision[1] to save the victim from the flaming wreck in a daring moment that was caught on camera. 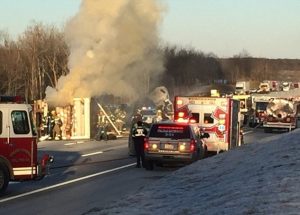 Abelardo Cadet-Ottly, a truck driver in training, was on his way from Massachusetts to Illinois with an instructor around 4:30pm February 18 when the tractor trailer driving in the opposite lane suddenly struck the median strip, exploding on impact.

Ottly and the instructor, Juan Suarez, immediately decided to exit their vehicle and run over to the wreck, which lay burning across the eastbound lane of the I-76 close to Exit 226 at Carlisle.

The crash happened after the driver ‘over-corrected to the left’ as he was shifting lanes, causing his trailer to jackknife, Pennsylvania State Police told Daily Mail Online.

Although the 40-year-old driver wore a seat belt, he was transported to hospital by paramedics who suspected ‘serious injury,’ according to police.

The trucker was charged with careless driving after the crash, police said. The westbound lane of the I-76 opened back up a few hours after the incident, while the eastbound lane remained closed at least through the evening, Penn Live reported.

Driving this machines is very dangerous work, you can imagine that this is a truckers worst nightmare. Lucky, Ottly and the others sprang to action. A community of strangers all trying to help save a life.