WOW: The Guy Who Tried To Shame Chick-Fil-A Over Gay Marriage Is Not Doing So Hot

Remember that obnoxious crusader who shamefully berated a Chick-Fil-A employee because she dared to earn a paycheck from a company that supported traditional marriage? According to the Daily Clash[1], karma is in full effect as the once-rich CFO of a medical device company has lost nearly everything and is broke, unemployed and living on food stamps. 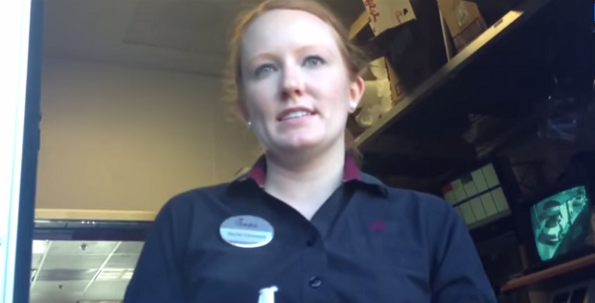 Sucks to be him, unemployed, homeless, and on food stamps. Something tells me that God is on Chick-fil-A’s side.

An ex-CFO and Chick-fil-A protestor who lost his job after posting a video rant against one of the chain’s employees has since lost his home and lives on food stamps.

Adam Mark Smith, 37, who worked for an Arizona-based medical device manufacturer, was shamed after the 2012 YouTube video was posted showing him berating employee Rachel Elizabeth.

The video which expressed his disdain over the firm’s anti-gay marriage stance went viral, and left him unemployed and forced to lose his home.

Nearly three years later, the married father of four is still searching for a job and his family previously had to give away possessions before he was hired and fired again, according to ABC[3].

At the time he was working as CFO for Vante, Smith was earning $200,000 annually and had more than $1million in stock options, but he said it was all taken from him when he was fired.

His 2012 firing was reported on the same day as the counter-protest against Chick-fil-A’s Appreciation Day as thousands of gay couples flocked to restaurants to kiss during the summer of 2012.

It seems that being a ridiculous, obnoxious loudmouth is not all that lucrative. I guess it pays to be nice.