WOW: Trump UNLOADS on Hillary and Says SHE HAS TO BE NICE to Obama because of this 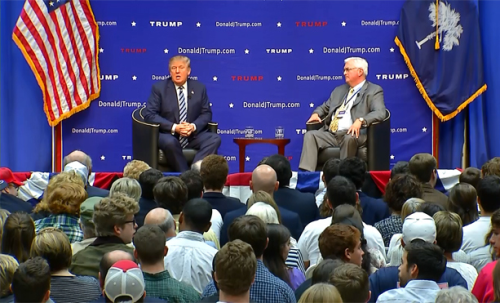 In his usual blunt style, Donald Trump indicated [2]that he believes Hillary is only a hair’s breadth away from prosecution. At this college forum, Trump candidly assesses the Democrat frontrunner’s predicament. Read on to see if you agree with him.

Donald Trump stepped up his pressure Friday on former secretary of state Hillary Clinton, labeling her a criminal who will win the Democratic presidential nomination as long as she avoids antagonizing the one man who can guarantee she stays out of prison.

Reflecting on a foreign policy speech Clinton delivered Thursday, Trump told a record-breaking crowd at Wofford College in Spartanburg, South Carolina that he knows why the liberal standard-bearer mocked Republicans who complain about ‘radical Islamic terrorism’ by name.

‘Hillary was unable to use the term the other day, but of course she’s very concerned that if she angers the president she’s going to get indicted,’ the real estate tycoon said.

Trump said the Democratic Party establishment has rallied around Clinton and has a vested interest in helping her steer clear of legal jeopardy related to her classified email scandal.

‘I think the party of the president is protecting her,’ he said, comparing her situation to that of former CIA director Gen. David Petraeus, who pleaded guilty last year to mishandling classified material.

Clinton is the subject of an FBI investigation related to allegations she, too, negligently managed classified information by using an unsecured private email server while she ran the State Department

‘Even though Petraeus was sentenced very severely, even though many people went to jail for doing about 5 per cent of what she did, I think she’s probably going to be the nominee and probably going to run unimpeded with the criminal investigation,’ Trump predicted.

‘I think it’s outrageous because frankly, what she did was absolutely criminal by any standard, and you can look at many different statutes.’

‘She’s being protected,’ he added, ‘and that’s not the way our country is supposed to be run.’

Trump, like the rest of us, is rather disgusted at the apparent law breaking Hillary engages in, and which is never prosecuted but instead is protected by Democrats. Trump’s immense popularity on campus is in direct contrast to the students who are flocking to Socialist Bernie Sanders. It seems that America’s youth are divided between Socialism and Capitalism. And Trump’s way of saying it like it is, is one major reason he appeals to students. Whether you love or hate Trump, let’s hope capitalism wins this campus battle at the polls.