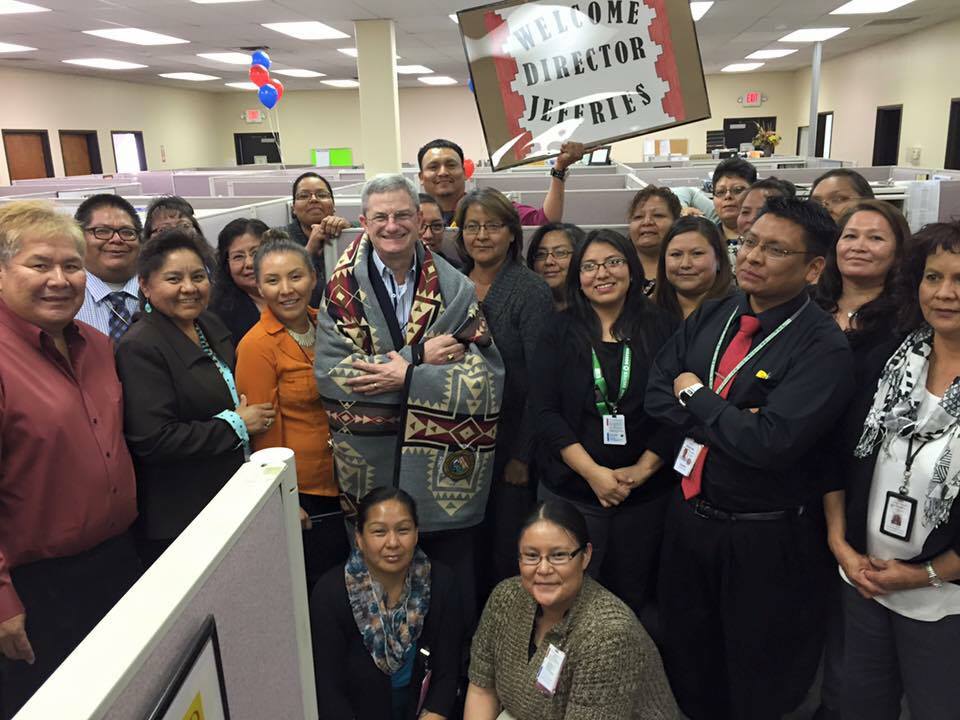 [1]Tim Jeffries was a popular director of the Arizona Department of Economic Security, the state welfare agency, from 2015 to 2016. He became a colorful icon in Arizona government, with his smiley faces and practice of referring to employees as “colleagues.” He was likely the only state agency head to cut the size of his agency by 2 percent as instructed by Arizona Republican Governor Doug Ducey. He turned morale around at DES, making it a fun place to work — no easy feat at a welfare agency. The devout Catholic has a heart and passion[2] for the poor and sick, coming from a poor upbringing himself. When the governor asked him if he wanted to be an agency head, Jeffries deliberately chose DES.

But this star reformer was pushed out in a highly publicized coup, spearheaded by the left-wing Arizona Republic which made him a target. After Jeffries fired 475 employees who were “bullies, racists, sexual harassers and slackers,” the newspaper featured some of the employees and wrongly made them out to be victims — even though some had actually been stealing from DES. The newspaper extensively covered Jeffries’ efforts to bring security in house, instead of paying for private contractors which were less accountable and not cost effective. The biased articles referred to it as “building an arsenal” and “stockpiling ammunition.”

With so much negative coverage, Governor Ducey caved to pressure, firing[3] Jeffries in November 2016.

The firing was so unjust that one of the local left-leaning papers actually took Jeffries’ side. The Phoenix New Times expressed skepticism[4] about the accusations brought against Jeffries. “Just before his ouster in late 2016, Jeffries reportedly[5] bought alcohol for employees on state time, but the accusation was never proven.” As for the private security force, the paper said “much of the criticism was overblown.”

Jeffries observes, “I had the passion and courage to ‘run government at the speed of business’ as the Governor directed me. Unfortunately, it proved to be merely a campaign slogan for the Governor. Consequently, calcified bureaucracy and special vendor deals remain to the profound detriment of hard-working taxpayers that deserve good government.”

Jeffries filed[6] a $5.1 million libel claim against the state over the private security allegations. His former chief of security, Charles Loftus, filed a $2.6 million claim. Jeffries is represented by former Arizona Attorney General Tom Horne. Some of the bizarre, false accusations in the audit performed by the state Department of Public Safety are that Jeffries carried a gun on state property and wanted to arm every state employee.

Ducey is vulnerable to a challenge from the right. He is ingratiated with Senators John McCain and Jeff Flake who are disliked by the conservative base, in part due to their repeated undermining of President Trump. Ducey endorsed Flake. Ducey’s lack of leadership was foundational to McCain’s vote stopping the Obamacare repeal. Ducey himself failed to stand with other Arizona leaders behind Trump at his August rally in Phoenix.

If re-elected to a second term, Ducey may end up appointing McCain’s replacement after the senator passes away from brain cancer. There are concerns that he would replace him with another establishment Republican. In contrast, Jeffries says, “I would be open to appointing anti-establishment warriors like State Treasurer Jeff DeWit, who was Trump’s campaign COO/CFO, or true conservatives like current Arizona Congressman David Schweikert and former Congressman Matt Salmon.”

Ducey is also vulnerable with teachers’ associations. Prop. 123, which he championed, only provided a 2 percent raise for teachers over five years.

Jeffries explains the difference between Ducey as governor and how he would run the state, “I entered the public sector to do big things, not small things with big press releases.” Jeffries describes Ducey as a “poll-driven politician.” Jeffries is fearless and unrelenting. He went after[7] a corrupt Democratic legislator who fraudulently obtained food stamps — something his predecessor was too afraid to take on. He had another corrupt member in the sights of his Inspector General — which sadly will now be swept under the rug. He boldly called for the termination of the corrupt vendor of the State’s Obamacare Medicaid Eligibility System.

“If I run and I win, I will not play small ball like the Governor. I will massively reorganize and restructure state government,” Jeffries said. “Partnering with thousands of true public servants, I will free up approximately 200 million dollars a year to invest in classrooms, foster kids, senior citizens and the developmentally disabled. These great folks need us to be audacious in vision and fearless in execution.” Jeffries says he does not have aspirations for higher office afterward; he is not seeking a political career.

Jeffries is the type of candidate the conservative Breitbart powerhouse Steve Bannon might get behind. Support like that — which might lead to support from Trump — could tip a race. Breitbart reports[8] that a “broad anti-establishment coalition” has been formed nationally to replace establishment Republicans in Congress and in key gubernatorial races. Additionally, after a successful career in business, Jeffries is independently wealthy and has a network of wealthy friends. Add to that fair press coverage from Phoenix New Times and Jeffries has a real chance of defeating Ducey. Arizonans are in an anti-incumbent mood due to McCain and Flake, and Ducey is too closely associated with the pair.