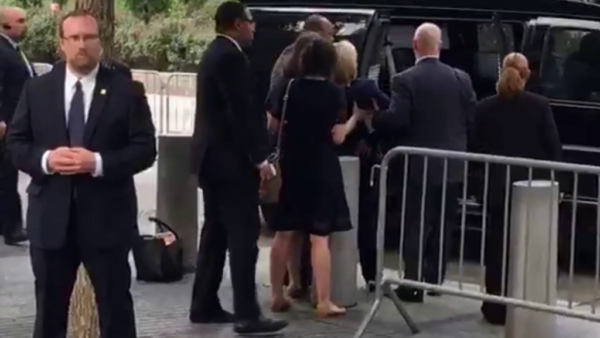 The Clinton campaign is rushing to explain yet another Hillary health incident.[2] Today, in lower Manhattan, Mrs. Clinton arrived about 8:18 AM at Ground Zero for a 9/11 Memorial event, but ended up departing suddenly only a little over an hour later. Her departure, apparently due to a negative reaction to the heat and humidity, shows that she either stumbled or fainted while attempting to leave. No explanation was given at the time, but the campaign is now madly trying to explain the incident away. Scroll down for video.

Hillary retreated to her daughter’s nearby NYC apartment for about two hours before being seen exiting, appearing to have recovered from her morning bout with the heat, even stopping to pose for a picture with a young girl. 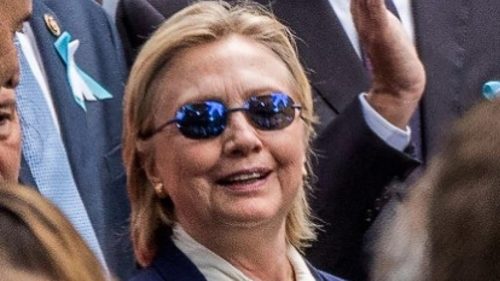 Those who have valid questions about Mrs. Clinton’s fitness for the most stressful office in the nation, have often been dismissed or mocked by the Leftist media and Democrat pundits. But clearly, she has some health issues and is not the picture of health the campaign would have us believe. Speculation runs wild and much of it is rather overblown. But the concerns are real as she continues to cough her way through speech after speech and refuses to hold a press conference. Is it pneumonia? Perhaps. But her health has been shaky for months, leading to speculation that she cannot withstand the rigors of being President.

Whatever the real story is, regarding her health status; the truth is that she is unfit for the office of President for a whole host of reasons other than health issues. She is a lying, corrupt woman whose negligence likely directly contributed to the deaths of four Americans in Benghazi and whose years as Bill Clinton’s First Lady are filled with cover-ups, more lying and corruption, thievery of White House treasures and numerous suspicious deaths linked to both her and her husband. Her favorite phrase when questioned about nefarious activities, “I can’t recall”, stands as a defining monument to her gutter level political career and the complicit media and Democrat operatives who accept that useless and no doubt dishonest answer.

Well Mrs. Clinton, the American people absolutely cannot wait for the day that you are such a distant memory, they can say, “Hillary Clinton? I can’t recall her.” And we are hoping that era starts next January as we inaugurate President Donald Trump.