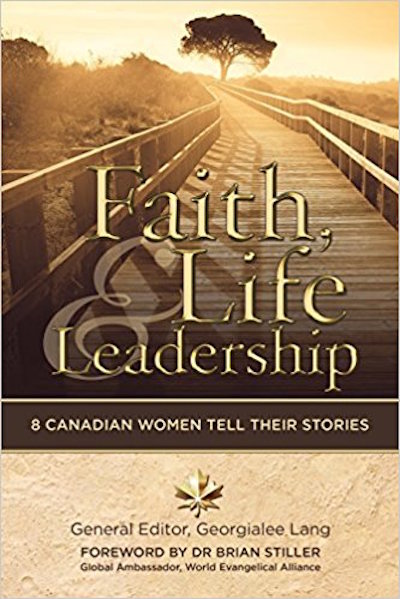 [1]Canadian attorney Georgialee Lang has edited a book containing the stories of eight of Canada’s most prominent Christian women leaders. In “Faith, Life & Leadership[2],” these Christian women tell how they overcame resistance and stumbling blocks in order to achieve positions of leadership. They didn’t get where they are at by being handed advantages growing up. Lang’s own story is one of the eight.

Lang went from prison to being recognized as one of The Best Lawyers in Canada for the past 12 years. After a tough family upbringing, she fell into abusing drugs with a boyfriend during her late teenage years. One thing led to another, and she ended up incarcerated, serving a nine-month sentence in prison.

After she was released, it took Lang awhile to find her way in life, as she kept clean, working low-paying jobs. Her new boyfriend Doug, a City of Vancouver police officer, dumped her after he discovered she had served time in prison.

While waitressing, Lang met a waitress who had a college degree, and it dawned on her that she wasn’t much smarter than herself. So at age 30, Lang registered for college and started attending church. She acknowledges[3] that a seed that had been planted in her at a young age from attending church helped bring her back. She obtained a college degree and graduated with the highest marks in her graduating class. Tellingly, Doug reunited with her.

Lang started law school and discovered, “You may be incredibly gifted, but without long hours and hard work your superior skills will be for naught.” She graduated from law school at age 35 and assures Millennials that it’s never too late to embark upon something different in life.

Lang credits her recovery in part to her energy and passion. She asks, “Is it possible to be a visionary leader without passion?” She answers, “Resoundingly no!” Lang reminds us what the Apostle Paul wrote in Colossians 3:23, “Whatever you do, work heartily, as for the Lord and not for men.”

It wasn’t all smooth going from there on, however. When Lang approached one of her law professors about dealing with her past going forward as an attorney, he disdainfully asked her how she possibly thought she was suitable for the practice of law.

Nevertheless, Lang overcame the odds. She embarked upon a successful career in family law, becoming a popular guest on TV shows to discuss issues in that area. She shared information with colleagues and even competitors, and made sure to say hi to her staff every morning. She was invited to become an adjunct professor at her alma mater, The University of British Columbia, where she taught students family law for six years.

But then she was diagnosed with Hepatitis C, due to her earlier drug use. At that time, there was no cure, it was considered a fatal disease. Fortunately, she lucked into a pilot project with drugs that potentially could cure the disease. However, the treatment, which included chemotherapy, almost cost her her ability to perform her job due to the toll it took on her strength and health.

The experience gave her a compassion for the less fortunate, and she opened up a pro bono firm for those who could not afford a family law attorney. Her career continued to excel; appearing three times as counsel before The Supreme Court of Canada. She took on an effort to end legalized prostitution, a rare and gutsy position for an attorney. Next, she defended Trinity Western University’s attempt to start a private Christian law school. Radical legal activists opposed the effort due to the school’s community covenant against premarital sex. Opponents claimed it discriminated against the LGBT community. The case is now winding its way up to Canada’s Supreme Court.

Lately, Lang has championed shared parenting. She wrote in one article, “Separating parents, usually fathers, are caught in a black vortex, fighting for the ability to remain an active part of their children’s lives, sparring with mothers who too frequently use their hurt and anger to alienate their partners from their children.” Lang joined Leading Women For Shared Parenting, an organization I am a part of. She is now one of the most vocal members of that group. The Canadian TV show 100 Huntley describes[4] Lang as “the lawyer who has fought for more issues about family, than … anyone else in Canada.”

Other women featured in the book reveal how they went on from various obstacles to become leaders in Christian media, Christian music, Christian ministry, elected office, academia, and The Salvation Army. Margaret Gibb went from[5] hardly speaking to a soul on her college campus her first semester there — due to being terribly shy — to becoming labeled one of Canada’s 100 Christian women leaders, a sought-after speaker and the founder and executive director of Women Together, an international women’s ministry. She lost her husband unexpectedly in midlife, but that hasn’t stopped her from continuing to lead.

Lang never dreamed she could overcome her hurdles to become a leader. “I always believed that leadership was reserved for the intellectuals, the emotionally secure, and the ones who grew up in a ‘good’ family,” she writes, “awash with business and community connections, surrounded by people who could open doors as they were mentored and encouraged.”

In fact, she discovered the opposite. “I’m convinced that the bad decisions I made in my late teens and early twenties gave me the motivation, drive, and frankly, the desperation to pick myself up and show the world that I was not that person.”

This is a great book for young women looking for mentors to look up to. And if you want to hear about how the Holy Spirit engages in our lives, these Canadian Christians aren’t afraid to tell you how.