You Have To See What This 30-kilowatt Fiber Laser Did to a Truck From Over a Mile Away!

I’ll be the first to admit that I don’t know much about the latest weaponry, but I do know that this fiber-optic laser is VERY cool, and could have an unlimited amount of practical military applications.[1] 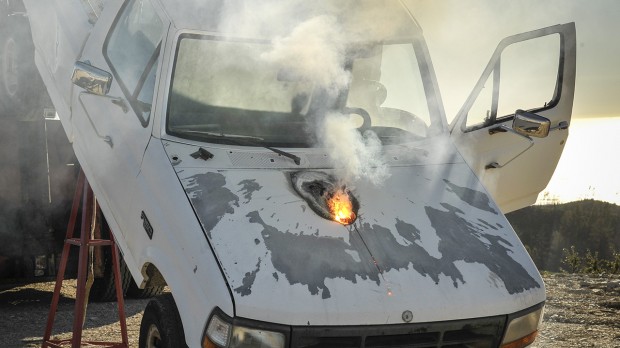 In what is being called the “highest power ever documented by a laser of this type,” Lockheed Martin announced this week that it fired a 30-kilowatt fiber laser weapon system[4] at a truck more than a mile away.

“Fiber-optic lasers are revolutionizing directed energy systems,” Keoki Jackson, Lockheed Martin chief technology officer, said in a statement. “We are investing in every component of the system – from the optics and beam control to the laser itself – to drive size, weight and power efficiencies. This test represents the next step to providing lightweight and rugged laser weapon systems for military aircraft, helicopters, ships and trucks.”

ATHENA is based on Lockheed’s Area Defense Anti-Munitions laser weapon system and it incorporates its Accelerated Laser Demonstration Initiative.

ATHENA uses a technique the company calls spectral beam combining, which is when several fiber laser modules combine to form a single beam, making it more efficient and lethal.

I think we should be able to have these for personal use as well. Nobody is going to break into your house if they think you have a weapon that will evaporate them.