A relative of mine lived to be nearly 100 and when asked what her secret was, she swore it was many, many cups of coffee each day. The world’s oldest person has another take on what to eat: bacon. She reportedly eats bacon every day.[1] 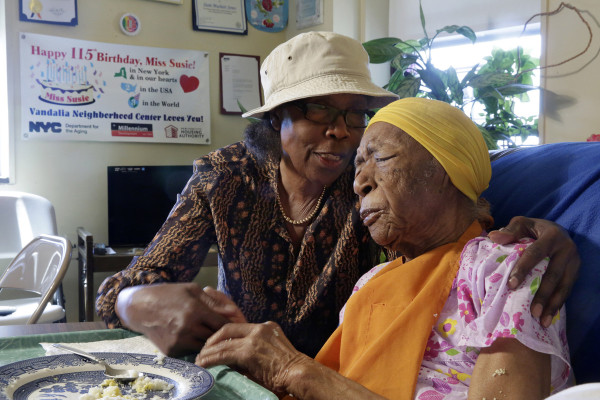 It turns out that the key to a long life is actually bacon.

If the woman who has lived in three centuries says it, it’s hard to argue with that statement.

Susannah Mushatt Jones, who turned 116 this July, says she eats bacon every day for breakfast and continues to snack on the crunchy delight throughout the day, she tells the New York Post[3].

An aide at the Vandalia Senior Center in Brooklyn told the Post that Jones will eat bacon “all day long.”

In fact, Jones loves bacon so much, her birthday cake this year was adorned with fondant bacon, reports the New York Times[4].

While bacon is Jones’ weakness, her bad habits have seemed to stop there.

According to the supercentenarian’s family members, Jones has never partied[6], worn makeup or even had a mammogram.

“I never drink or smoke,” the supercentenarian said at her birthday celebration. Jones has also never dyed her hair.

Jones became the world’s oldest person on her birthday this year.

Although bacon is her go-to meal, Jones told Guinness World Records[7] she surrounds herself with love and positive energy. This is what she truly believes has helped her live a long and happy life.

Some delicious crispy breakfast meat didn’t seem to hurt, either.

I’ll admit that that doesn’t sound quite right to me, but hey, we can’t argue with the results!