You Won’t Believe What Country Has HUNDREDS Of Protesters Carrying “TRUMP IS RIGHT” Signs…? 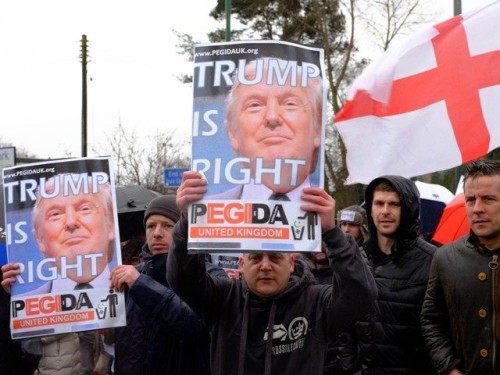 European citizens are starting to understand that their liberal progressive leaders have sold them out. It is clear by what has happened in many EU nations, that immigrants are destroying their host cultures from within, like an aggressive cancer. The traditions, languages, and unique traits of these nations are being systematically torn to shreds by waves of immigrants who have no intention of assimilating into their new cultures, only decimating them beyond recognition. This group in England has heard what Trump is saying about getting the border under control and wants the same for their own nation. Who can blame them?

HUNDREDS of Supporters took part in the first PEGIDA rally [2]in Birmingham, England on Saturday.

PEGIDA – Patriotic Europeans against the Islamisation of the West.

The protesters carried “Trump was Right” signs at the rally.

For many European nations, unless some common sense immigration policy is enacted and they begin to resist the destruction of their native culture, it may be too late. The great capitals of Europe are beginning to show the destructive effects of unchecked immigration and the ongoing unaddressed attacks on culture. These demonstrators are right to be concerned. We can only hope someone in government is listening. What do you think about this group of concerned citizens?