And the Parent of the Year Award goes to….. not these people. A 13 year old Nigerian girl says her parents gave her to Boko Haram militants as a suicide bomber. Just the thought that these people would give up their children to certain death is enough to make any sane person sick with rage.[1] 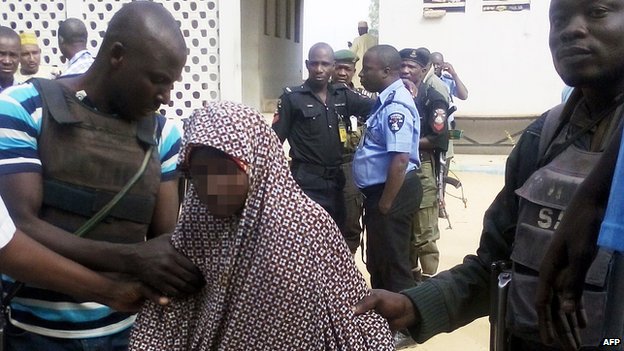 A 13-year-old Nigerian girl has told how her parents gave her to Boko Haram militants to be used as a suicide bomber.

The girl, speaking at a news conference organised by police, said she was taken to the city of Kano where two other girls detonated their bombs.

About 2,000 people have died in attacks blamed on the Islamists this year.

The girl told journalists that her parents had taken her to militants hiding in a forest near the town of Gidan Zana in northern Kano state.

She said one of the leaders asked her if she knew what a suicide bombing was.

“They said, ‘You will go to heaven if you do it.’ I said ‘No I can’t.’ They said they would shoot me or throw me into a dungeon.”

The girl said she finally agreed to take part in the attack but “never had any intention of doing it”.

She said she had been injured when one of the other girls detonated her bomb and ended up at a hospital where her explosives were discovered.

It was not possible to independently verify the girl’s story. Correspondents said she had no lawyer present.

Kano police said they wanted the girl to tell her story to make the public aware of who was behind the attack.

Boko Haram, a Sunni Islamist group, has been waging an insurgency in Nigeria since 2009.

In recent months the group has taken control of a series of towns and villages in north-east Nigeria and has vowed to create an Islamic state in those areas.

Nigerian authorities have struggled to defeat them.

For being an alleged “Religion of peace,” Islam sure does breed a lot of murderous creeps who are determined to kill as many people as they can. One thing is certain: any “religion” that dictates killing “unbelievers” to be your ticket to heaven is not a religion at all, but instead a cult that needs to be eradicated.