You’ve Been Slicing Your Watermelon WRONG: Video Reveals How To Skin The Fruit In 4 Simple Steps

Is cutting watermelon a hassle for you? A recent food vlogger has revealed a new way to skin a watermelon. Check it out and see if it’s right for you[1]: 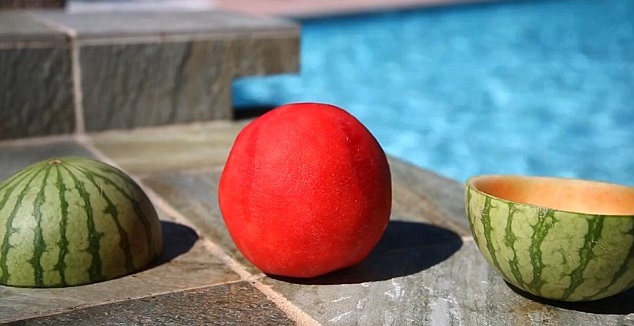 We all know that slicing a watermelon can be quite a tricky job however one crafty vlogger has revealed a way of skinning the large fruit.

YouTube star Mark Rober, who has a loyal following of almost 300,000 subscribers, uploaded the video demonstrating his technique to a group of children.

At the beginning of the clip Mark removes each half of the watermelon shell to reveal a whole ‘skinned’ fruit inside.

The children are in complete awe and they aren’t the only ones. The video has already been viewed more than 18,000 times on his channel Creativity, Design, Science since it was uploaded a week ago.
However, during the four-minute clip Mark reveals that the method is not all it seems and it actually involves using more than one of the thick-skinned fruit.

‘You need to start with two watermelons that are similar in shape and size,’ he explains.

As he begins to slice away at the skin, he adds: ‘And then you want to just make a bunch of shallow straight cuts until there’s no green left.’

‘For round two you want to harness you’re inner fruit ninja and make a bunch of little slices until there’s only red left.’

Once the melon resembles a large pink egg, the YouTuber uses a scourer to smooth the surface.

The inventive vlogger then explains how to create a new hollowed out shell for the skinned fruit.

He says: ‘So the second watermelon is pretty straightforward, you just cut it in two halves using your favourite method.’

He cubes his watermelon and removes any flesh from the inside of the shell so that the skinned melon will slot easily inside.

Mark says that it makes the ideal party snack: ‘So the coolest part is that now you can put it back together and take it to the party like this. Just don’t forget to chill it.’

I don’t know; I’m a watermelon purist and won’t even eat seedless watermelons. I think I’ll stick to the tried-and-true ways.