What is even wrong with the world these days? I mean, the concept of a normal family is becoming lost in a world where it is increasingly acceptable to act in bizarre ways that get you the most attention. I mean really, a mom, who believes she is both male and female, and a father who is transitioning to become your mother? To a young boy who is dressed in both girl and boy clothes? It’s like a bizarre sitcom plot that gets cancelled after the pilot bombs.

I’m just glad this is happening in Britain and not the United States, though something tells me between Tumblr and shows like “I Am Jazz,” we’re not far off. 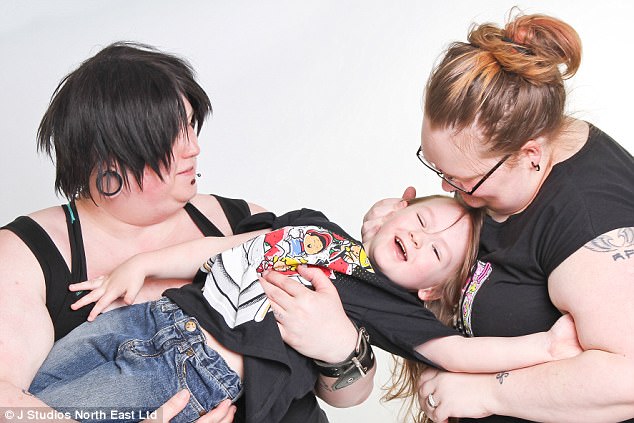 Nikki and Louise Draven are both mother and father to a beautiful baby boy. But they don’t see it that way.

Louise is a man transitioning to become a woman, and Nikki feels like she is both a woman and a man. This boy’s family tree is going to look interesting[2].

‘Neither of us gets hung up on the gender we were born as,’ Louise, 30, said. ‘We don’t want our child constrained by that either. We’re just an ordinary family being who we want to be.’

Their son, Star Cloud, likes to wear makeup, play with dolls and paint his nails.

When they send him to school in September, he will wear a boy’s uniform, but has a pink vest that he will wear to class.

They’re not imposing a gender on their SON and say that he can grow up to be either a man or a woman, and they won’t care.

‘We never tell Star he’s a boy, we tell him he can be whatever he wants. We don’t buy gender specific toys or clothes and we let him choose what he wears. Pink is one of his favourite colours.”

I’m sorry, but doesn’t this feel a little bit like we’re trying to mess with nature? I’m just not here for that.

We need to get things together.