Add together three things: (1) the malignant, exhibitionistic narcissism that characterizes our age; (2) the prevailing attitude that perverts should be able to shove whatever they like in other people’s faces; and (3) the LGBT community’s obsession with corrupting the innocence of children. The result is this:

Families at a Manhattan public school talent show got an unexpected lesson in human sexuality when a grown man took the stage in a black, sequined dress and flaming red wig and performed a raunchy drag number where he grinded the stage and spread his legs.

The official public school Learning Expo held May 25 in an auditorium at the Museo del Barrio was billed as a talent show for students from across Manhattan’s District 4 to show off what they learned in school.

But at the end of the two-hour event, parents and kids as young as 5 were shocked when a man identified as Public School 96 Parent Association President Frankie Quinones took the stage and did an explicit lip-synch performance of a song by the campy 1980’s Puerto Rican music sensation Iris Chacón.

The point, according to District 4 Superintendent Alexandra Estrella, who emceed the event:

“The school district told me the performance was about LGBT awareness,” she said.

Raise LGBT awareness any further and it will trigger enough gag reflexes to put us knee deep in vomit.

Presenting Parent Association President Frankie Quinones, as he presented himself to small children and their families: 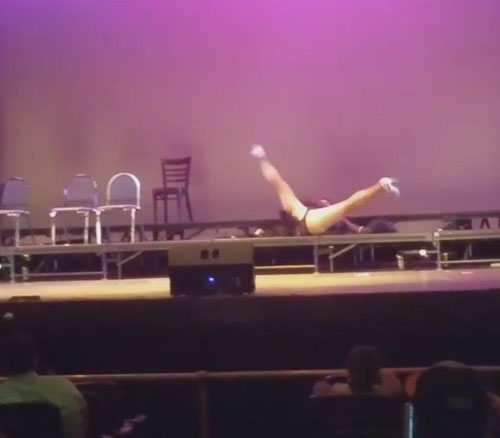 Hold on, they are not through pushing the envelope yet. Until someone stops them, they will never be through.

On tips from Sean C and Lyle. Cross-posted at Moonbattery.