Surprise: Transgender Cop Turns Out Not to Be Very Wholesome

A poster child for transgenderism turns out to be a skeevy degenerate? Say it ain’t so:

A transgender police officer in Washington, D.C., who has repeatedly been praised as a community role model has also quietly been reprimanded for improper sexually-tinged antics with underage police interns.

In a story published Thursday night, NBC4 News profiled Jessica Hawkins as a police officer who “helps build trust in [the] D.C. community” due to his work on an LGBT outreach unit. Hawkins, who previously went by Billy, is biologically male but identifies as a woman, and publicly transitioned two years ago.

NBC4’s story is just the latest positive one about Hawkins, who has also been profiled by NPR, Metro Weekly and other outlets.

The reality behind the liberal media’s puff pieces is more in line with what you might expect. Local Fox 5 pulled back the curtain:

“Sgt. Hawkins showed the interns a ‘homemade video of her [sic] having sex with 4 men while she [sic] was intoxicated,’” Fox’s report says. Another complaint filed against Hawkins accused him of taking under-21 interns to an Arlington gay bar, where she [sic] helped them buy alcohol and laughed at one intern’s possession of a fake ID.

According to Fox, Hawkins has admitted that both complaints against him are accurate, and was quite cavalier in the admission.

Why shouldn’t he be cavalier? Hawkins has every reason to assume that he will continue to be rewarded for making a pageant of his degeneracy and abnormality. The magic word “transphobia” will convert the reprimands into a promotion. 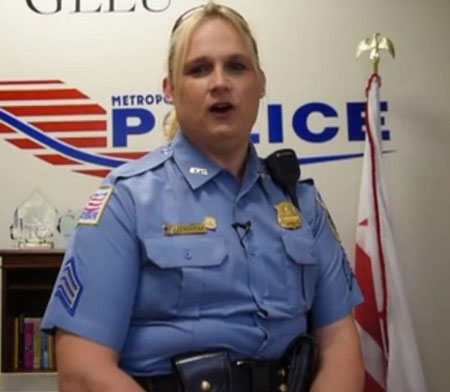