Saturday’s moonbat marches were not completely in compliance with moonbat ideology. Stand by to see Orwell’s 2 + 2 = 5 applied to biology:

Signs like “Pussy power,” “Viva la Vulva” and “Pussy grabs back” all sent a clear and oppressive message to trans women, especially: having a vagina is essential to womanhood.

Feminazis who fail to pretend that men pretending to be women really are women are called TERFs (trans-exclusionary radical feminists). Jade Lejeck, a guy who wears women’s clothes, says there are two varieties of TERF:

One is the accidental TERF — “the ones who have signs that equate womanhood with having a vagina,” [he] said. The other category, Lejeck explained, includes feminists who argue trans women are actually men in disguise trying to infiltrate their spaces.

Political correctness requires you to believe that a man literally is a woman simply because he says he is. Every media piece that uses female pronouns to refer to men like Bradley Manning and Bruce Jenner attempts to impose this utter insanity.

Another transvestite denounced the spectacles as “a white cis women march,” and a creature describing itself as “nonbinary” puled, “As a nonbinary person, the emphasis on genitals just bought into the rigid, Western concept of gender.”

You had to figure that Western Civilization was to blame for the allegedly oppressive notion that the concepts of male and female are rooted in objective reality. 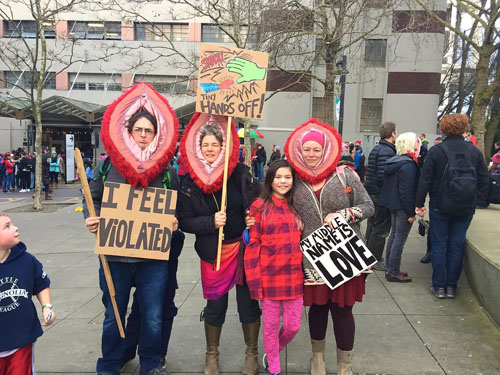