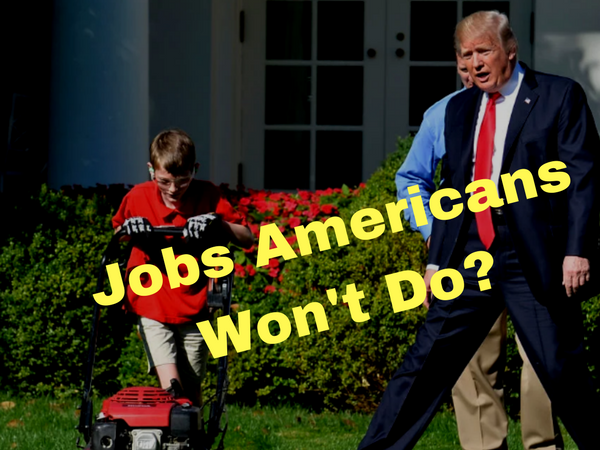 11 year-old Frank had one wish: to mow the White House lawn.

Hey, if kids want to do housework, let them do it! So, Frank wrote a letter to the President saying:

“It would be my honor to mow the White House lawn some weekend for you. Even though I’m only ten, I would like to show the nation what young people like me are ready for. I admire your business background and have started my business. I have been mowing my neighbors’ lawns for some time. Please see the attached flier. Here’s a list of what I have and you are free to pick whatever you want: power mower, push mower, and weed whacker. I can bring extra fuel for the power mower and charged batteries for the weed whacker. I will do this at no charge.”

Free lawn mowing service? And he’s not even doing this for a Scout badge or a school project, he’s just trying to get started in the business world in the only way that a boy his age can do so. What a great way to advertise, to be able to clean up the President’s lawn!

The obvious joke here is that, see, who needs millions of poorly treated, underpaid and abused illegal immigrants when there are Americans looking to do the jobs that Democrats swear that nobody wants?

This morning, Frank’s dream came true and he was invited to provide a free lawn mowing. The Press Secretary, herself a working mom of young children, posted this photo early today:

Frank is hard at work in the Rose Garden and doing a great job! pic.twitter.com/u4f2DtLvu6[2]

Frank’s business is called FX Mowing and he arrived with his father at the White House early this morning to work on the Rose Garden and meet the President himself. Trump tried to say “GREAT JOB!,” but the mower was too loud and Frank just kept pushing it along. For a man with the most stressful job in the world, this must’ve been a welcome sight. I don’t think Ivanka would be able to get away with ignoring her father!

Frank was all business. Didn't even stop to say hi when POTUS came out. pic.twitter.com/SpB43z1Jwp[4]

Later in the Oval Office, Frank told the President he’d like to be a Navy SEAL, but Trump said maybe he’ll become a President, too.

Cutest news story this week! So cue the liberals freaking out, claiming that Trump supports child labor. I’ll have to call my parents up and tell them that they were breaking child labor laws whenever they made me pick up sticks and rocks before someone stronger than me pushed the mower, not to mention the dish washing and the sweeping!

Child labor is a big Trump thing. Nice to see you didnt outsource this job.

Ivanka is not the only trump who prefers child labor

Shame on these lefties. No wonder they think it’s better to import illegals than it is to expect American kids to get off the couch to knock on doors if they want spending money.