One of the reasons this administration doesn’t really care if veterans are dying on waiting lists…most: don’t vote for Democrats[1]: 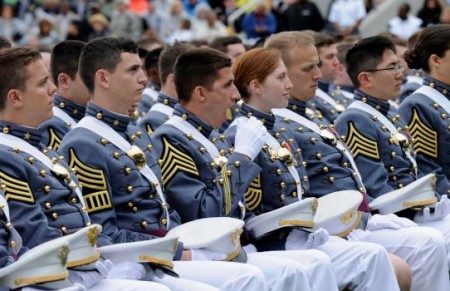 President Obama was welcomed by the Black Knight of the Hudson for his speech at West Point on Wednesday, but less than 25 percent of the cadets gave him a standing ovation upon his introduction, the Daily Mail reported.

“Receiving tepid applause and a short standing ovation from less than one-quarter of the audience upon his introduction, Obama argued for a contradictory foreign policy that relies on NATO and the United Nations while insisting that ‘America must always lead on the world stage,’ the paper reported.

During his speech, which the Wall Street Journal called “consistent with that of every post-Cold War administration,” the president also took a swipe at critics, saying: “I believe in American exceptionalism with every fiber of my being. But what makes us exceptional is not our ability to flout international norms and the rule of law; it’s our willingness to affirm them through our actions.”

This whole speech was an exercise in leftist nonsense.

From the Law of the Sea Treaty to the whole, “I love America” bit, Obama was either indoctrinating or lying.

The only good thing is, clearly most there weren’t buying what he was selling.